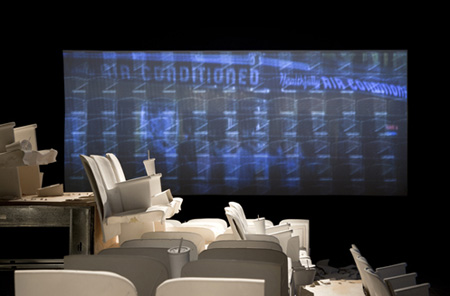 The aesthetic experience in this case includes nostalgia, wistfulness and a bit of sadness when viewing the two gallery-size multimedia installations of “Extended Collapse” by Seattle-based artists and architects Annie Han and Daniel Mihalyo. The ambitious exhibit is the second in a series on “Architecture + Art.”

The crux of the show is an eerie reassembling of the movie house that once stood where SMoCA is now, before Phoenix architect Will Bruder (of Phoenix Public Library fame) re-envisioned it as an art space worthy of downtown Scottsdale. For longtime Scottsdale-area residents such as myself, the memories of what the space used to be are palpable when viewing Han and Mihalyo’s main installation: floor-level and elevated rows of theater seating are entombed in crumbling white plaster, complete with spilled soda cups and popcorn cartons. Adding to the ghost-like feel are the two movie screens competing for attention. One screen shows faded, slow-motion footage of moviegoers circa 1975, along with pulsing grid-like images recalling the cinema’s interior. The other screen shows dusty, cactus-studded footage from old Westerns interspersed with aerial views of Scottsdale estates, tennis courts and swimming pools. As the space formerly known as United Artists Cinemas has changed, so has the booming city of Scottsdale, the installation suggests.

The second large installation, “Welcome Fragment,” is a partial reconstruction of the movie house’s framework, with the beams and metal pipes forming a pleasing pattern all the way to the ceiling. A wooden ticket counter with a simple workshop light and exposed wiring sits beneath a forlorn marquee bearing the word “CLOSED.” The artists give it a haunted house feel all the way down to the flickering red ceiling light and the frayed blue awning. Yet the feeling is one of reverence for buildings gone by, and a corresponding embrace of the buildings - in this case a museum - that replace them.