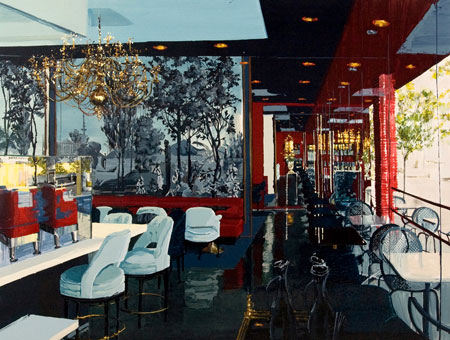 If you can get past the “trick” of this show - that the places Kirsten Everberg depicts in her lush paintings are not necessarily the places that the titles say they are - then you can easily let the subject matter transport you to a sumptuous era and the stuff of Hollywood. Billed as “Looking for Edendale,” this show marks this Los Angeles-based artist’s first major solo exhibition in a U.S. museum. Edendale refers to an area of Los Angeles that served as the early 20th-century hub of cinematic production on silent films. Appropriately, Everberg capitalizes on L.A. architectural landmarks such as Chateau Marmont and the Bradbury Building to evoke a distinctive Hollywood romanticism.

To that end, the paintings depict perfect lobbies, sitting rooms, swimming pools, libraries and other spaces as if they were ready for the camera. Even though the scenes are devoid of people, they hold a mesmerizing beauty. The allure is in Everberg’s precise and confident technique, using thick and controlled lines and swirls of enamel dripped onto canvas or paper. The result is amazingly tactile, vibrant and layered. A piano, for instance, stands pitch black and glossy; a row of fringed red lanterns gives a romantic glow to a bar and its shelves of liquor bottles; a parquet floor is polished to perfection; and the cushion on an antique chair looks as soft as velvet.

But the way Everberg titles her paintings can disorient you, and the placards for the show don’t let you in on the trick. It was only after seeing the show that I learned a grouping of four paintings showing lush vegetation are, in fact, all variations on the same site, despite names like “The Congo” and “Rio de Janeiro.” Similarly, paintings titled “Military Hospital, Great Britain” and “Hotel Royale, China” are reinterpretations of the same architecturally significant LA building. A little bit of confusion might be intentional on the artist’s part and, in true magic-of-Hollywood style, viewers just have to go with it.