Myths In and About Surrealism
Commentary by Betty Ann Brown
Based on "The Surrealist Adventures of Women Artists in Mexico and the U.S." at LACMA 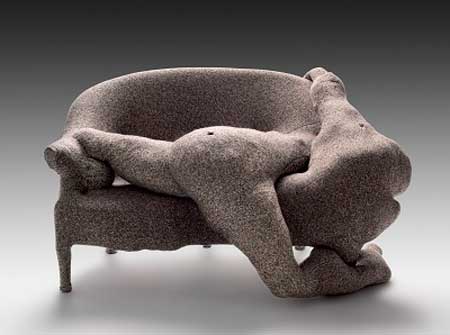 Art history suffers from misconceptions that, once generated, achieve the pervasive power of “urban myths:” fictional accounts that reinforce popular [mis]understandings through endless and uncritical repetitions. One is that Michelangelo painted the Sistine Chapel ceiling while lying on his back, with plaster raining down upon him. In actual fact, he stood while creating monumental fresco: We have a scribbled drawing the artist himself did in the margin of a letter that illustrates his upright position.

Another art historical misconception is that Andre Breton, the founder and leader of Surrealism, was an unrepentant misogynist who — to quote Christopher Knight in a January review in the Los Angeles Times — “blithely figured that what [women] wanted was forever to be cast in the outlier role of the ‘other.’” Although it may be true that the young Breton was very much a participant in the sexism that dominated his era, by the 1940s he had grown to understand the importance of women in the spiritually infused world he sought to generate with mature Surrealism.

Writing during the horrors of World War II, Breton proposed to counter the crises of contemporary culture with a revaluation of the feminine. “The time has come to value the ideas of woman at the expense of those of man, whose bankruptcy is coming to pass fairly tumultuously today. It is artists, in particular, who must take the responsibility ... Let art resolutely yield the passing lane to the supposedly ‘irrational’ feminine, let it fiercely make enemies of all that which, having the effrontery to present itself as sure and solid, bears in reality the mark of that masculine intransigence which, in the field of human relations at the international level, shows well enough today what it is capable of.” (Breton, Arcanum 17, 1944, pp. 61-62)

Most of the art in the current "In Wonderland: The Surrealist Adventures of Women Artists in Mexico and the United States" exhibition at Los Angeles County Museum of Art was created after Breton championed the revaluation of women artists. As such, it was well within the purview of “doctrinaire” Surrealism, not “outlier” as both Knight and the exhibition curators would have us believe. In fact, Breton strongly supported women like Leonora Carrington and Frida Kahlo, including them in exhibitions in Paris and the Americas. I want to suggest here that if women like Carrington and Kahlo were “outlier,” they occupied that position in relation to the dominant art historical discourse — not in relation to Surrealism as a whole … and surely not to Breton personally.

Which brings me to that bête noire: dominant art historical discourse. It may be difficult to believe, from the perspective of a 2012 viewer, that all of these women — even the now widely acclaimed Frida Kahlo — were invisible to most of twentieth century art history. But such is the case. One way to test my assertion is to survey art history texts of the century. The first edition of H. H. Arnason’s seminal text, "History of Modern" Art (1968), neither discusses nor illustrates Kahlo’s work. Nor does it refer to the work of Carrington. Indeed, the only female Surrealist mentioned is Meret Oppenheim, whose fur-covered teacup known as "Object" is reproduced on page 366. However, on the following page (367), Arnason discusses Oppenheim as a male artist: an ironic mistake, to say the least. Arnason does include the work of lesser male Surrealists such as Eugene Berman (whose art is currently featured in "L.A. Raw" at the Pasadena Museum of California Art), Oscar Dominguez, and Kurt Seligmann. He fails to acknowledge any women in the movement. (Thirty years later [1998], Kahlo’s work was included in the fourth edition of Arnason’s tome, co-edited by National Gallery curator Marla Prather. The attention to the minor male Surrealists was diminished.)

The LACMA show is historically significant precisely because it writes women back into the Surrealist narrative they helped shape. It also demonstrates the enduring appeal of Surrealism to figurative artists throughout the twentieth century. As such, it is an important counterpoint to "L. A. Raw." Both exhibitions offer alternatives to the histories of the twentieth century that are driven by abstract modernism. Further, "L.A. Raw" curator Michael Duncan subtitled his exhibition “Abject Expressionism in Los Angeles, 1945-1980” and, intriguingly, the term abject is doubly connected to Surrealist women. Historically, it has roots that go back to Surrealist writer Georges Bataille’s ideas about the informe. And conceptually, the term abject can be used to refer to marginalized groups such as, though hardly limited to women.

But more important than the art historical impact is the fact that the LACMA exhibition has so much damn good art. To my mind, the star of the show is Frida Kahlo’s "Dos Fridas," a double self-portrait from 1939. The larger-than-life portrait was created for the surrealist exhibition that Andre Breton organized while he and his artist-wife Jacqueline Lamba were traveling in Mexico with Diego Rivera, Kahlo, and Leon Trotsky. Kahlo’s monumental canvas is a remarkable vision of dual heritage — her German father and indigent mother — painted decades before “multiculturalism” made identity politics fashionable in the art world. Beautifully executed, "Dos Fridas" pairs precise European realism (learned when the young artist was training to be a medical illustrator) with native symbolism, such as the revealed hearts that recall the gruesome necklace of the Aztec Earth GoddessCoatlicue.

Equally impressive, but smaller in scale and miniaturist in treatment, is the handful of paintings by Spanish-born Remedios Varo. Like Andre Breton, Varo fled Europe for the New World, but because she was married an outspoken Communist (Surrealist poet Benjamin Peret) Varo was denied entrance to the United States. She settled in Mexico City, where she became best friends and a frequent collaborator with Leonora Carrington. Throughout their time in Mexico, Varo and Carrington hosted Surrealist parties with wildly surreal food and strange surreal games.  (I’ve often wondered if one of their parties inspired Luis Bunuel’s 1962 film "The Exterminating Angel," about the guests who become trapped at an elegant dinner party and descend into barbarism.) Varo developed a unique narrative style, depicting female figures navigating otherworldly waters, painting birds with pigment distilled from moonbeams, or playing the rainbow-hued music of the spheres.

Leonora Carrington articulated her idiosyncratic vision through both image and fiction. Like Varo, her early paintings portray young women breaking social barriers to establish independent identities: Carrington rejected the elitist expectations of her high society British family. Varo left the restrictions of Catholic school far behind when she became a Surrealist in Northern Spain. Later, Carrington depicted — and wrote about — mythic worlds occupied by giants, demons, unicorns, and goddesses. Her 1960 novel "The Hearing Trumpet" is a whimsical tale about Marian, a 92-year-old woman who needs the “trumpet” to hear. (She receives the trumpet from her friend Carmella, a character modeled on the author’s real friend Varo.) Abandoned by her less-than-gracious son, Marian enters a surreal world inhabited by werewolves and nature spirits. Her bizarre adventures, including the alchemical rituals she co-creates, are echoed in Carrington’s mature artworks, both the paintings and the strange masks made from, for example, red rawhide and an etched mirror.

Another standout painting in the exhibition is Dorothea Tanning’s "Birthday" (1942). Tanning — who died at age 102 on January 31 of this year — created the work when she was living in New York and working as an illustrator. Noted curator Ann Temkin observes that "Birthday" pairs an exquisitely realist self portrait with “shimmering mother-of-pearl light, infinite recession of doors, and extraordinary perspective.” The animal familiar at the artist’s feet is a furry chimera with feathered wings and forked tail — the perfect companion for dream-induced travels. (Surrealist émigré Max Ernst saw the painting in Tanning’s studio while co-curating an exhibition with his then wife, gallerist Peggy Guggenheim. Apparently, he liked the artist as well as the artwork: He divorced Guggenheim to marry Tanning in 1946.)

All of these artists — Kahlo, Carrington, Varo, and Tanning — make significant contributions to the figurative tradition in Surrealist painting and all are well represented "In Wonderland." On the other hand, the biomorphic abstraction of Surrealism seen in the oeuvre of male artists like Joan Miro is virtually absent. Yes, there is a Lee Krasner canvas. But I for one am hard-pressed to see how that qualifies as a surrealist work.

Why aren’t there more surrealist abstractions in the exhibition? Is it a curatorial oversight? I think not. What women Surrealists were doing was contributing to a pair of agendas in the surrealist quest. First, they sought to come to terms with their psychological selves, the selves explored in the Freudian theories that initially inspired Breton’s foray into multiple levels of consciousness. Many of the works I have mentioned here function as such psychological investigations. But they secondarily function as explorations of the feminine in the realm of myth. And this is where they participate in the post-World War II directions traversed by Breton and the other Surrealists.

As it happens, when Breton left Europe for New York in 1941, he travelled on the same ship as French Structuralist anthropologist Claude Levi-Strauss. Mythology was one of Levi-Strauss’s primary interests and no doubt the topic of many of their conversations on the long Atlantic crossing. When Breton settled in New York, he began speaking and writing about what he called “The Great Transparents”: mythic beings who occupy a realm above and beyond our own. By 1947, when he returned to Paris and organized that year’s International Exposition of Surrealism, he focused on alchemy, esotericism, and myth. He designed the Galerie Maeght space as a series of ritual initiations. Visitors crossed the “Hall of Superstitions” into a labyrinth containing altars dedicated to the Great Transparents and other mythic beings. Carrington and Varo contributed paintings; Czech painter Toyen (Maria Cerminova) and Brazilian sculptor Maria (Maria Martins) created two of the altars. Entitled "Le Chemin, l’ombre, trop longs, top entroits," Maria’s altar is a bronze statue of a woman who strides forward, in front of a horned Great Mother figure wrapped in mysteriously intertwining tendrils. Although the tendrils reach out towards the younger woman, she marches ahead, stepping strongly towards her goal.

Maria’s altar sculpture is located in the final room of the LACMA exhibition, but perhaps it should have been sited earlier, to announce the mythic content that occupies so much of the exhibition — and of so much of the post-war Surrealist effort. Breton called Maria the “shining star” of post-war art. Alongside Carrington, Varo, and Toyen, her presence in the 1947 exhibition confirmed the central position of women in the later development of Surrealism. Today, it also reminds us of the spurious nature of the art historical myth about Breton’s continued misogyny.