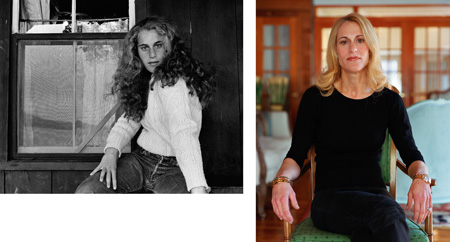 “One is not born, but rather becomes, a woman,” wrote Simone de Beauvoir in "The Second Sex." The French existentialist’s thesis is born out intriguingly and alarmingly by renowned photographer Gay Block’s series "The Women the Girls Are Now," one part of a career-spanning exhibition of Block’s work, "About Love." Back in 1981, Block photographed 7- to 15-year-old girls at a summer camp near Harrison, Maine.  Fast-forward to 2006, when, with the help of an assistant, she tracked down and re-photographed the girls, who by this point were women 33 to 41. Today, the original black-and-white portraits are displayed side-by-side with the 2006 color photos, in which the women pose in their homes, sometimes sharing the frame with their own young children. This photographic time travel belongs to a sub-genre shared with multi-year chroniclers such as Nicholas Nixon and Jock Sturges, but Block’s lens captures something in the accrual of 25 years that goes beyond the loss of baby fat and the addition of nascent crow’s feet that mark us all; her counterpositions jarringly expose the performative female mask — that amalgam of clothing, accessories, grooming, and deportment that are corollary to the trappings and entrapments of contemporary femininity.

Positioned on the left side of each diptych are the summer-camp prequels: Kathy Miller/Kathy Kramer as a fresh-faced tomboy outfitted for tennis; Meredeth Feidler/Meredith Dennes with her freckles, pigtails, and open, curious expression; and Susan Dion/Susan Strauss as a denim-clad teenager with wavy, Carole King hair and an unselfconsciously open-legged sitting posture. To the right of these images are the same individuals photographed a quarter-century later. To deconstruct each sitter individually would be unfair and also irrelevant, because the homogenization these women have undergone seems to have stripped away individual identities, leaving only a prefab archetype of the glossy, well-put-together, and oh-so-very-happy-and-satisfied habitué of early middle age in the upper middle class.  Yesteryear’s tomboyish sportswear has been replaced with constructed suits, sensible pearls, and Cartier wristwatches; naturally wavy hair has been straightened, while naturally straight hair has been permed; once-tawny faces have been caked with foundation, eyeliner, concealer, mascara, rouge, and lipstick; eyebrows have been waxed off, then drawn back on with colored pencils.

The viewer is left to ponder whatever happened to the indignation voiced by Germaine Greer in "The Female Eunich:"  “I’m sick of peering at the world through false eyelashes, so everything I see is mixed with a shadow of bought hairs.” Greer’s 1970 battle cry is nowhere to be heard or otherwise evinced in Block’s 2006 portraits, in which wide-eyed youthful curiosity has yielded to the plasticene, Botoxed rigor mortis that passes for self-possession as the latest wave of feminism breaks and rolls back. There are exceptions to this rule who appear authentic and comfortable in their skins and lives, but the preponderance of imagery suggests that patriarchy and the male gaze — and women’s varying degrees of subjugation to, or complicity with, them — are in no danger of abating. The old dance between the sexes, the old sensical and sensible, prideful and prejudicial Jane Austen dance, holds sway.

This is therefore a sobering exhibition, which seems to have unnerved even the photographer herself. In a Youtube video about this body of work [http://www.youtube.com/watch?v=1K37YikQVi4&feature=player_embedded], she laments that as she was pre-interviewing the women, they seemed guarded and primarily concerned with how they would look in the finished portraits. “I wasn’t particularly satisfied sometimes with the interviews,” she remarks. “It was very difficult to go deeper.” Block plans to photograph these subjects again in 2016. Perhaps by then, time, circumstance, and self-acceptance will have etched deeper lines into their characters as well as their countenances.