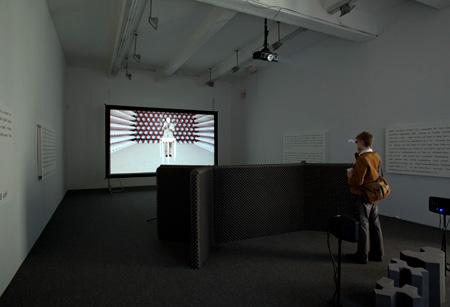 “Glossodelic Attractors” represents the broadest exhibition of Gary Hill’s video installations since the Henry Art Gallery organized the traveling museum survey “Gary Hill” in 1994-‘95. Hill has been internationally recognized as a pioneer of “video art” since his early experiments with the medium in the 1970’s. Despite his mastery of video editing techniques (more recently digital), and his inventive use of video equipment (such as “rasters” — monitors stripped of their casings — employed in the installation "Inasmuch As It Is Always Already Taking Place," 1990), it is limiting to describe Hill as a “video artist.” His intermedia installations incorporate sculpture, sound, text, performance and viewer interaction, as well as computer-controlled electronics, to explore a range of recurring concerns, especially liminal contiguity between image and language, the self and the other (the self as other) and experience and meaning.

Included in the current iteration of the show (in August a new set of installations will be rotated in) are seminal early works such as "Mesh" (1978-’79), an interactive installation using surveillance-type cameras which capture the viewer’s image and display it in various pixilated forms on three monitors. In a sense, the viewer’s presence “meshes” with the display, undercutting, as nearly all of his works do, the idea of the passive reception of image that is the primary characterization of television and digital media culture. The audio — static, pops and digital chirps — enforces the eerie experience of "Mesh," which seems to draw on Cold War-era paranoia as well as prefiguring contemporary surveillance infrastructure.

Anchoring the exhibition are the two complex installations "Withershins" (1995) and "The Psychedelic Gedankenexperiment" (2011). "Withershins," meaning counter-clockwise, consists of a maze that we navigate, stepping on sensors that trigger programmed words and phrases (“the left hand is in the right …”) spoken by either a male or a female voice (depending on which side of the maze one enters). Two opposing screens, one showing a man’s hand gestures and one showing the back of a woman’s head, are also activated by the sensors. Like "Mesh," this installation requires participation, and complicates notions of agency and progress: Do one’s footsteps control the spoken variables, or does the structure of the maze preempt choice?

"The Psychedelic Gedankenexperiment," a dual-channel installation with wall text, is the most intriguing and complex work in the show. It requires a fair bit of decoding, but a decoding that emphasizes the act of decoding (making meaning) rather than the resultant meaning or theory (which Hill notoriously defies). Two facing screens show Hill giving a “lecture” of sorts, which at first seems to be nonsense — glossolalia. On a closer “reading” and with the help of the wall text, one notices that Hill is speaking phonetically “backward” in one video, as well as walking backward and disassembling a molecular model and a table. The same video is projected on the second screen but playback is reversed, so that the speech comes out “right,” albeit alien-sounding, and Hill walks forward, etc. The subject of the lecture is the experience of LSD: “I am taking the liberty as artists do to declare lysergic acid diethylamide (LSD) as the art experience par excellence …”

The installation, by destabilizing the relationship between meaning and the standard, progressive act of language, confounds any attempt at discovering the actual act depicted. The video becomes a closed circuit, intricately structured and executed in a Mobius strip. Think of it as an endlessly recursive and balanced loop between the facing video screens. To say very little, "The Psychedelic Gedankenexperiment" deepens and exacerbates Hill’s prevalent exploration of the structure of time in relation to language and image (as in "Mediations (towards a remake of Soundings)" [1979-’86]) illuminates the other works in this visceral and “psychotropic” exhibition.