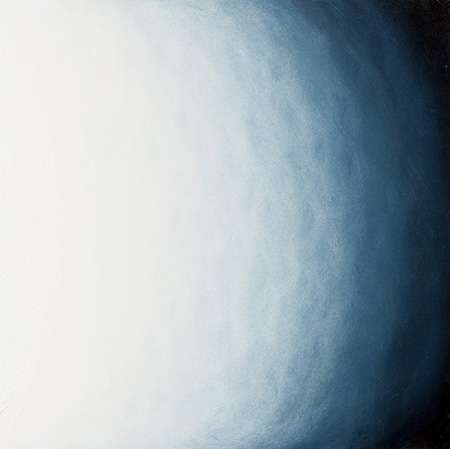 “Poems and More” is a series of monochromatic works by Joan Watts that don’t necessarily appear to be monochromatic. The body of work presented here is a study in form and masterly control of paint. The subtle gradations from a color-filled edge or corner of any of a number of Watts’ paintings to a pure white, have a luminous effect, like light penetrating a deep sea. At their most brilliant white, they seem to meld into the surrounding walls, focusing attention on the more saturated areas of color.

Like a good poem in a traditional format, her paintings maintain nuance and effect within formal relationships based on geometry and a visual consistency. There is a constant back and forth happening within them, in part due to the contrasts from one side of each painting to the other. The challenge to the viewer is not to read them as representational. While the smoky, liquid patterns and moon-like forms are suggestive enough to establish literal bases for her paintings — light reflections on water, for instance — Watts never allows her paintings to do more than merely edge into that representational territory.

One need only look at the soft, undulating patterns to know that the painting itself is rendered with a careful precision, more like something from an old master than the typically monochrome surfaces of a color field painter or minimalist. This is the kind of work that has within it a double sense, of being concave one moment and convex the next. You never know if you are looking at an object, subtly defined by a hint of its overall form, generally ovoid, or looking at a kind of empty or void space. The depth of Watt’s paintings allows for such considerations.

Other intriguing aspects of Watts’ paintings are their warmth and tonal range. For being essentially black and white images, the interplay between the light and dark reveals tones of blue, brown, grey, and green. Those delicate hues elicit feelings of intimacy, like being in a room of soft, diffused light.

“Poems and More” is composed of three distinct series: small, square foot “poems.” a related larger series of untitled works, and diamond shaped paintings. Accepting obvious considerations, like the diamond shapes versus the squares, and whether or not the pigment deepens along one side or in the corner, Watts’ paintings have fine differences. Some allow the darker paint primacy on the canvas, while others strike a more equal balance between light and dark. Still others allow the whiteness to take over most of the surface area, pushing back the darkness to the edges. It’s an attractive exhibition. Watts’ paintings, despite an initial impression of sameness, are lovely to look at, as simple and beguiling as a series of koans.