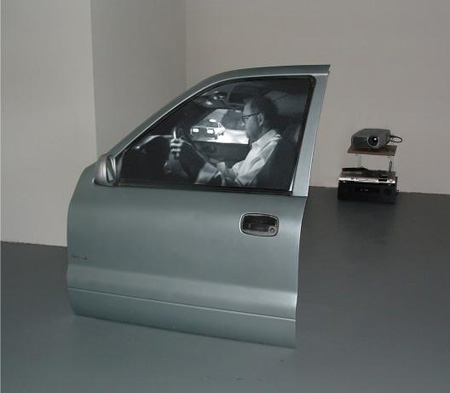 The immersive experience that is a Peter Sarkisian exhibition accomplishes exactly what the master video artist wants: a desire on the part of the viewer to engage with the images, not just vacantly stare at them. One wants to touch the blue water in the bucket of "Blue Boiling in Pail" (2003), to grab the wheel from the reckless driver of "Registered Driver" (2004), even to help two naked men out of their womblike cube.

"Peter Sarkisian: Video Works, 1996-2008" is a mini-retrospective that includes several landmark pieces, including the aforementioned "Dusted" (1998), in which the artist blends video projection on a nearly three-foot-high white cube with the eerie audio of human voices. The illusion presents two writhing figures occasionally poking their hands out of the cube, as if asking the viewer for aid. There's "Registered Driver," projecting a video of a crazed driver onto the actual side of a car, complete with audio of squeals, screams and crashes. "Blue Boiling in Pail" uses blue light and percolating sounds to play with the viewer's perception of reality.

Humor and repulsion are among Sarkisian's intended effects, but for any creative types (especially writers), probably the most engrossing piece is "Book" (2011). It's a video projection of a little man crawling on top of a real open dictionary. Haphazardly, he crosses out words and inserts editorial digs such as "Blah, blah, blah!!" and "been done." This writer, for one, was ready to pound the man with her fist.