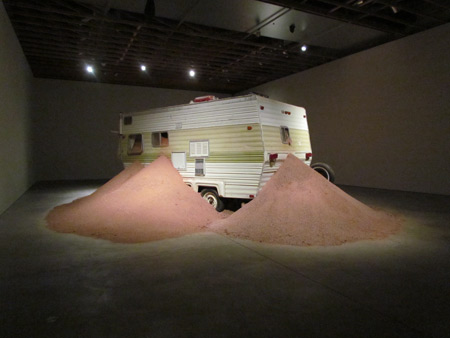 As the artist behind numerous open-air installations across five continents, Héctor Zamora creates works that invite reactions ranging from amusement to outrage. For the 2009 Venice Biennale, the Brazil-based Mexican artist composed the lighthearted “Zeppelin Swarm,” in which manipulated photos give the appearance of Venice being overtaken by zeppelins. By additionally wedging an actual zeppelin between two Venetian buildings he greatly expanded the impact of the idea and its public presence. In Colombia, he perched hundreds of bananas on the upper-floor windows of two buildings, allowing citizens on the street to watch the bananas rot. In Peru, he dismantled a fishing boat - serving as a symbol of the country’s working class - in a public courtyard, an act that drew hecklers. In the pursuit of art, he has tangled with municipal officials and ordinary citizens alike.

Zamora’s far-flung installations are seemingly of the people and for the people - and sometimes even by the people, as when he invites local workers to aid in whatever large piece he is constructing or deconstructing. No doubt, his travels around Arizona in 2011 led to moments of anxiety on the part of the Scottsdale Museum of Contemporary Art. What would be his take on the Grand Canyon State? The result is a commentary on barren desert life, on an area with strong ties to military might and economic downturn - all an amalgamation of perceptions and conditions that struck Zamora deeply. The product of his response is offered here in two disparate parts.

The first and more provocative is “Reductio Ad Absurdum,” in which a darkened gallery is given over to a 1976 ALJO travel trailer that Zamora and local workers have filled with 25 tons of native red dirt. It spills out of the windows of the RV and into pyramids that surround it. Zamora purchased the trailer from a man living in poverty on Phoenix’s desert outskirts. As a symbol of Zamora’s statement on Arizona, the installation originates with and alludes to the economic mess into which the common man has been submerged.

The second part is a 30-minute video, “OG-107 Scenery,” documenting Zamora’s installation inside a hangar near Sky Harbor Airport. The installation lasted just one day in late October, but the video offers insights into Zamora’s process. He utilized 17 Army parachutes, all “OG-107,” or post-World War II olive green, tethered to electric floor fans. Through Zamora’s intervention, the hangar becomes an almost magical sea of uniformly colored “jellyfish,” all of which are continuously billowing toward the ceiling. In addition, the sight of them runs counter to the idea of parachutes descending to the ground. The museum's press information explains, “Although the voluminous canopies reach heights of 35 feet, the imposing airplane hangar both frames and contains them.” The video of the installation greets museum visitors before they enter “Reductio Ad Absurdum.”

Zamora’s pair of works invite refection on several familiar, mostly polarizing social issues, including the housing collapse, encroachment into the desert environment, poverty, joblessness, the disintegration of American values, the military presence in the desert and the purpose of architecture.

The exhibition is one of SMoCA’s contributions to Desert Initiative, a multi-venue, multidisciplinary effort cutting across five states in the Southwest that has been presenting an international as well as regional roster of artists and lecturers. Zamora's projects, “Absurdum” in particular, offer the latest validation to the desert as a breeding ground for ambitious art.