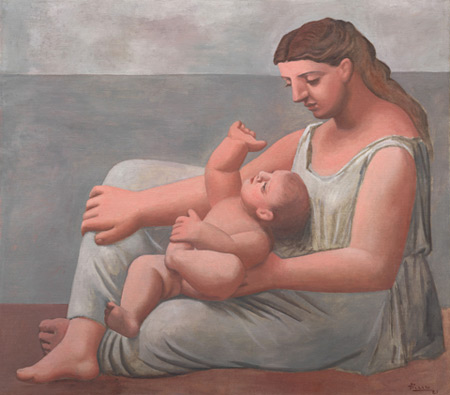 Pablo Picasso never set foot in Chicago in his lifetime. Despite that fact, this exhibition entitled “Picasso and Chicago” appropriately showcases a connection to the city that was most crucial to the early dissemination of Picasso’s work in the U.S. Chicago is home to a monumental public sculpture by the artist erected in Daley Plaza in 1967 and was also the site of the first “non-commercial space” to mount a solo exhibition of his work in this country. “The Art Institute of Chicago acquired a Picasso before the Museum of Modern Art was even founded in New York,” curator Stephanie D’Alessandro explained to the members of the press - a detail peppered throughout the other verbiage of the exhibition. However, “Picasso and Chicago” is not just about reiterating Chicago’s importance in the shadow of New York’s art historical dominance.

Organized chronologically, the exhibition contains major works from the collection and some loaners from local collectors, along with a mountain of works on paper from the archives. Pieces like “The Old Guitarist” (that aforementioned first painting acquired by the AIC) and “The Red Armchair” are familiar to those who visit the museum regularly, yanked from their usual hanging spots and recontextualized here. The works on paper vary widely in media, from woodcuts and etchings to gouaches, sketches and drawings.

Most often the works on paper are intriguing surprises. “The Bull,” a series of eleven lithographs from 1945, depicts the animal in various degrees of abstraction, each as compositionally strong as the one before it. Created in 1936 and published in 1942, “Original Etchings for the Texts of Buffon” are intricate prints of various creatures like a chicken, a lobster and a monkey, further examples of the artist’s masterful rendering of the animal kingdom. Also of note are the broadside-like prints of Picasso’s poetry, the handwritten texts and accompanying illustrations arranged on the paper in quadrants.

The works on paper often hold their own among the more renowned paintings and sculptures, though some are merely supplements to major or more completed pieces. The stages of Picasso’s reductive linocut, “Still Life with Lunch I and II,” are separated, the unfinished proofs hung as a series. Similarly, in “Two Nude Figures: Woman with a Guitar and Boy with a Cup” viewers see the multiple failed proofs of the etching made by Picasso before the final print was executed by a more experienced printmaker. While these two sets of proofs are certainly learning tools for the viewers and documentation of the artistic process, they are simply fragments of wholes that don’t hold up as artworks in an exhibition context. Also supplementing the exhibition is a room containing no art, only the forensic procedures to which Picasso’s works have been subjected. Pieces such as “Mother and Child” are approached like science projects, dissected through x-rays, cross sections and paint samples, undermining the aura of the finished artworks.

“Picasso and Chicago” is surely not a ‘blockbuster’ exhibition filled with one famous masterpiece after another, but what this exhibition and its mountain of works on paper provide is an unexpected way to approach the life and art-making processes of the marquee artist of the twentieth century.