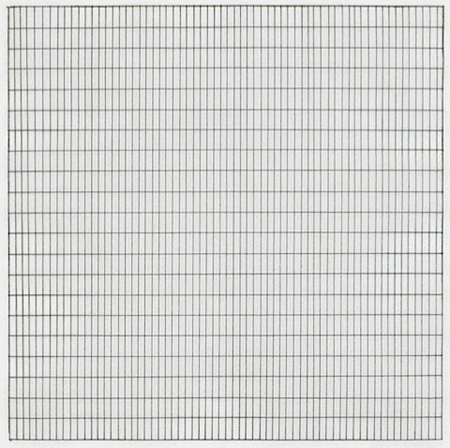 "Again: Repetition, Obsession, and Meditation" includes works which deal thematically with repeated action. The grouping is enigmatic but elegant, as provocative visually as it is intellectually. Even one of the most austere works, Stuart Arends’s "Stanza dell’Amore 24," a vertically situated diptych consisting of pale grey lines of oil paint, supports the exhibition’s theme. Renate Aller’s ocean photographs behave like windows, whereby the viewer is transported to a calming seaside. The compositional space of "December 2008" is divided into equal parts of dark sky and wave-crested sea. "March 2006" is dominated by the sky, and the bottom rim of the photograph contains undulating waves, headed for the shore. Aller’s work is gorgeous on its own, and makes for a fabulously fitting addition in a show about repetition and meditation.

Most of the works are like this: they speak for themselves, albeit in soft tones that require attentive listening. In keeping with the theme, a selection of lithographs from Agnes Martin, the late doyenne of minimalism, fit perfectly in the show. Though she initially dabbled in figuration, Martin’s true passion was strictly ordered compositions possessive of an intent, sometimes solemn austerity. "Untitled," from a 1991 Stedelijk Museum, Amsterdam portfolio, is organized like this; a deliberate configuration of intersecting lines forming a pattern that is so blatantly understated it takes on its own form of genius. Likewise, a pair of etchings by Sol Lewitt is a testament to simplicity. Their long titles describe the works perfectly: one is called "Straight lines, approximately one inch long, drawn at random, within a square using four direction of line, 1) vertical 2) horizontal 3) diagonal, left to right 4) diagonal, right to left and all combinations of those lines." The works consist of frenetically hash marked areas, which are nevertheless rendered in deliberate and appealing composure; Lewitt’s offerings perhaps best exemplify the exhibition’s subcategory of obsession.

One of many standouts in the show was the photography of Jean-Luc Mylane, who is best known for capturing images of birds — a deceptively simple subject that the French photographer injects with a fascinatingly nervy edge. The pair of photographs in "Again" have to do with a red velvet armchair; in the first image we see the chair as it appears from the outside, looking into the room through a glass window. The next photo takes us inside the room with the red chair, but now we’re looking outside from within the room. There’s a heady, delightfully voyeuristic quality to these works.