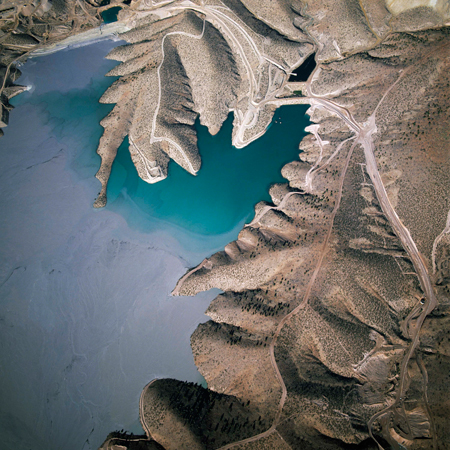 From the vantage point of a light plane, David Maisel trains his camera on the wide open spaces of the American West and their epic clash with open-pit mining, industrial waste and urban sprawl. In 28 pigment prints selected from five ongoing aerial photography projects, Maisel acutely documents how humankind’s interventions in the natural landscape have taken an undeniable toll on deserts, mountains and plains.

The show, titled “Black Maps: American Landscape and the Apocalyptic Sublime,” is not only a dark reference to geographical desecration, but also is a nod to the “apocalyptic sublime” era of 19th-century British painting. The photos seem to ask, can irreversible damage in the way of decapitated hills, denuded forests and unnaturally colored toxic lakes be rendered beautiful and uplifting?

Maisel's prints a highly color-saturated, so that a viewer can easily mistake the large-scale images for abstract paintings. In “Terminal Mirage 2” (2003) for instance, a bone-colored swath across an inky blue expanse is visually interesting for its contrasts in color, its swirls and areas of detail. It takes a while to realize it’s water discoloration from a combination of organic materials and deadly toxins put there by manmade processes.

Similarly, “The Lake Project 17” (2002) is a seemingly pleasing array of grids, black scrawls and puffy white shapes that reveals itself as an aerial photograph of industrial pollution only when the viewer notices the road tracks in the upper left corner and recognizes the thin black shapes in the center as smokestacks.

Less obtuse in its subject matter is one of Maisel’s earlier aerial photographs, “The Mining Project (Clifton AZ 7),” from 1989, in which desert hills jut like peninsulas into an aquamarine sea of mining wastes. It’s not the only work addressing the ravages of mineral extraction; one image depicts a heavily terraced mountainside with concentric scars that reach down to the mining pit as if one were staring into Dante’s circles of hell.

Thinking about the images even more abstractly, a viewer might see red lakes and rivulets as if they were blood, or interruptions in a landscape as if an area had been ripped open. In one instance, a lime-green tailing pond has a curved line weaving through it, as if a painter had decided to run his finger through a still-wet surface. In “American Mine (Carlin NV 1),” from 2007, a vast pool of toxins dominates the image and practically threatens to suck the viewer in, like a black hole.

This survey of Maisel’s work, organized by the University of Colorado Art Museum, comes from five series created between 1989 and 2007 and encompassing the controversial Owens Lake in California (the largest source of particulate matter pollution in the U.S.), the Great Salt Lake in Utah, and various mines in Arizona, Nevada, Utah, New Mexico and Montana. Also on hand are three tonally reversed, black-and-white aerial views of the Los Angeles basin, which prompt the viewer to think of looping superhighways, cookie-cutter houses and endless development are realistic but, for all of their detail, feel like another world, stunning to the eye yet not necessarily habitable.