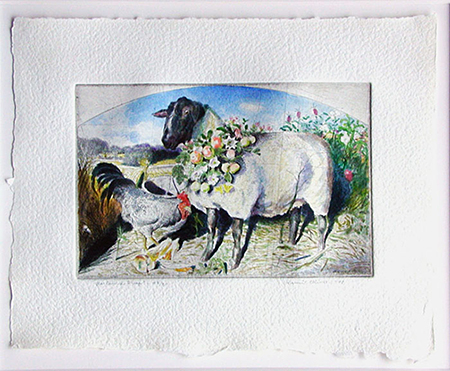 This small survey of Waco-resident Kermit Oliver’s paintings and drawings, along with one of his signature Hermes scarves, was assembled from various collections to honor the artist, celebrate a lifetime of making art, and introduce his work to a new generation of Houstonians. In honor of a career that has stretched over nearly half a century, the Art League of Houston selected Oliver to receive their first Lifetime Achievement Award.

The artist is known to longtime Houston art collectors and aficionados through his many solo shows at Hooks-Epstein Galleries, a major retrospective at the Museum of Fine Arts, Houston, in 2005, and shows at other Texas museums. These 17 pieces date from 1971 to 2013, and the selection provides a succinct summary of Oliver’s career.

Born in Refugio, Texas, in 1943, the artist has been exhibiting his work since 1970. He has made art consistently since graduating from Texas Southern University in 1960 with a degree in art and art education, this in spite of holding down a fulltime job as a mail sorter for 29 years. Oliver retired from the post office in August, which will hopefully allow him to focus entirely on making art.

Oliver is known for his quirky subject matter executed in a classical technique. He paints animals, figures, self-portraits, biblical allegories, and metaphorical compositions in a photo-realistic style. He grew up around horses, chickens, goats, cows and sheep, and those animals are seen frequently in his work. He is sometimes inspired by art history, especially paintings of biblical subjects such as the Virgin and Child or the Pieta. According to the artist, his compositions come from disparate memories of the past that he collages together.

In “Caged Macaws With Casa Blanca Lilies,” a brilliant scarlet and turquoise macaw is trapped inside the rib cage of a skeleton pictured beside a bouquet of white lilies. This poignant piece goes beyond simply commenting on the cruel practice of caging exotic birds; it becomes a metaphor for feeling trapped and not being able to find a way out.

“Garlanded Sheep” is a tour de force in which Oliver displays his superior draftsmanship and facility with paint. In this detailed drawing/painting of a sheep wearing a garland of flowers around its neck, the head is painted very realistically in stark contrast to the rest of the piece, which is drawn with graphite. It is executed on a gessoed birch panel; the finished piece has then been placed in a handcrafted frame with silver-embellished corners and crown. Intricately carved frames are another important part of Oliver’s work, focusing attention on the paintings but drawing attention to his woodworking skills as well.

Oliver is the only American artist to be commissioned every two years or so by Hermés, the French fashion house to create designs for their renowned silk scarves. It takes Oliver up to year to design each detailed painting that is then transformed into the large square scarves that are so popular.

His unique juxtaposition of animals and figures make for idiosyncratic pieces that resonate with mysterious significance. Since the artist is famously reclusive and dislikes talking about his work, the viewer is left to draw his or her own conclusions. Or, on the other hand, perhaps it’s best not to over-analyze Oliver’s work and simply be content to gaze in wonder at his creations.