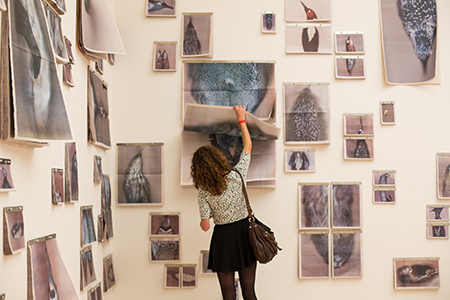 Seattle has been good to Ann Hamilton, very good. She’s grossing $1 million for a big public art project on the renovated downtown waterfront. She got her start on museum-size installations at the University of Washington Henry Art Gallery in 1992, a show that led to over 70 other installations, including the Venice Biennale. The Fourth Avenue lobby floor in Rem Koolhaas’s Seattle Central Library is hers. And now, 22 years after her Seattle debut, she has filled the entirety of the Henry (including the 1998 Charles Gwathmey addition) with “the common SENSE,” a giant carnival of death.

Epitomizing the way the artist works in many directions at once, the huge project is also a result of collaborations with the University’s Burke Museum of Natural History and Culture (she was a Visiting Fellow); the University Libraries’ special collections; and the Museum of Biological Diversity at Ohio State University, where Hamilton teaches.

The institutional academic links are crucial because “the common SENSE” is, among other things, an exploration of the mentalities of 19th and 20th-century science museums. Learned discussion is bound to be triggered and stimulated by the re-configuring, in various parts of the building, of actual dead animal pelts and bird feathers along with fur coats, fur dresses, fur scarves and fur parkas, all relating to another of Hamilton’s themes: touch. The inviting tactility of the fur counterbalances the revulsion of seeing dead animals. Upstairs in the original 1926 Carl Gould building, hundreds of scanned and digitalized color news-printed photos of more dead animals and birds greet the viewer, who is free to tear off one or two to keep as souvenirs.

The term “endangered species” does not cover the extraordinary spectacle of slaughter Hamilton has aestheticized. This is not the first time she has addressed the relationship between humans and birds. In “parallel lines,” the second part of her 1992 Seattle debut, she released 500 “rented” yellow canaries into the building. “Seattle Times” art critic Deloris Tarzan Ament reported that they would be “sold back” to a breeder after the exhibition. Most ended up dead. The stench was horrible. Fortunately Hamilton chose not to repeat this regrettable fiasco, which attracted the attention of PETA and other animal rights groups.

Is “the common SENSE” an apology or a retort to “parallel lines”? The dead animal and bird photos are surrogates for the live canaries, unwitting, innocent victims of an uncontrollable urge to turn death of all kinds into art.

Reading is a more benign, uniting theme elsewhere. In entry galleries and on shelves around most of the other spaces, printed excerpts of writings on the themes of touch and human-animal relationships are available in order for visitors to create their own “commonplace book,” the Victorian convention of quotation keepsakes that the 58-year-old artist has latched onto. The selections of readings were solicited online and refined and edited by the artist. In this way, too, Hamilton reflects two important contemporary art trends she helped pioneer: artist-as-curator directing public outreach; and viewer participation as subject matter. The exhibit stresses both with mixed results. With reading such a trendy intellectual issue, the literary excerpts seem more salty garnish than meaty substance or catalogue. They are not the required critical monograph on a Hamilton exhibition one expects.

In the sunken, 10,000-square-foot Gwathmey expansion space, the carnival continues with 20 rotating, sound-activated wood-and-metal whirligigs. Bizarre yet festive, it’s hard to link them to the rest of the project, just as Hamilton’s earlier drawings, videos, photos and altered books seem a bit disingenuous, creating a mini-retrospective within the show. Still, she had a lot of walls to cover. The images of prickly clothing and odd body art upstairs link Hamilton to non-art practices of aboriginal and indigenous peoples, all the while highlighting the science museum loans in low display cases as if they were art.

Death, as another artist, Dario Robleto, has also shown us, was an obsessive Victorian occupation. But why has Hamilton omitted dead children from her show? The Victorians could not get enough of them. Children’s fur mittens and capes will have to do.

Listening to the rotating sculptures, the visitor also overhears student performances of reading aloud and singing in choral groups or by themselves, all staged by Hamilton. An overall immersive, sight-and-sound environment surrounds one at every point, resisting explicit interpretations and remaining perplexing, cold and somewhat creepy. Hamilton is so important — the MacArthur, Guggenheim, Heinz, Venice Biennale, she’s done them all — that we must pay attention to her eccentric and quietly persistent jeremiad. Whether cataclysmic warning or melodramatic, indulgent and morbid sideshow, “the common SENSE” requires multiple viewings.