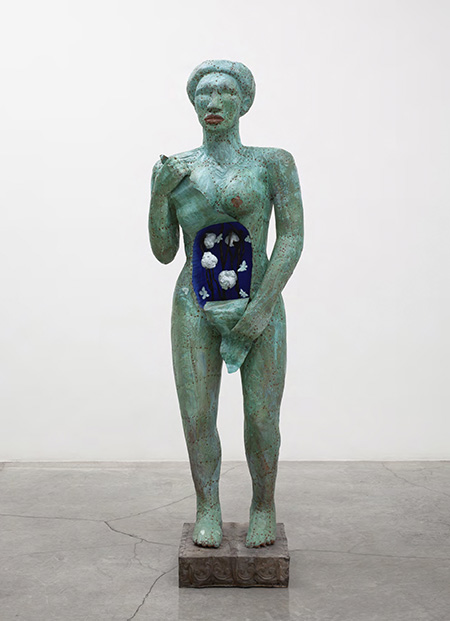 Hot house — the words invoke orchids, a Tennessee Williams play where America’s oxygen is torpid, macho, oddly erotic, or those long, crowded cabins where slaves slept, sang, birthed, bled. "Hot House" is the title of Alison Saar’s show and the content — formal as well as associative — is as varied and complex as those words. The examples gathered here will be familiar to anyone who follows Saar’s work: nappy hairdos and fecund breasts sprouting milk (or roots) from erect nipples — as in the wall bound "Lunarseas: Sea of Nectar." All of the works are made with Saar’s singular gift for elegant, arduous technique (bronze that looks like wood; wood that is patina-ed) that’s unquestionably the product of academic study, but hinged to this feeling that they’ve been sketched or carved on a back porch or modeled of clay from a river bed. I’d venture that Saar wouldn’t find this last observation colonially insensitive. Striking these chords seems intentional, strategic, profoundly felt and studied on her part.

It would be disingenuous then, to suggest the show doesn’t address in a most personal manner Saar’s identity, or nod to her inescapable envelope that includes (to riff on Adrian Piper) some quadruple negation suggested by being a female artist, of mixed race, a mother, a wife, and significantly, a hetero woman of a certain my-youth-is-behind-me age. The last of these does not come off as an ageist lament, but like an honest look at the meaning of nature and time through the vehicle of self-observation. The complexity of states like aging, and Saar’s acknowledgement of their sentimentality, loss and empowerment come through in “Lunarseas:  Sea of Serenity," a wall-bound pubescent face swarmed by butterflies.

That said, one cannot say this work is about race or femininity per se. There is content here which terms like ‘woman of color’ are neither sufficient nor nuanced enough to cover. Back when white male-ness dusted everything — courtroom, bedroom, boardroom, classroom — it seemed appropriate to scream out specific identities in arts and letters at a volume able to undo eons of exclusionary erasure. Multiple generations of Saar family artists participated in those critical shifts. But this show evidences that it would be a mistake to keep this old saw going when it comes to Saar. Today if someone demands that ‘seminal’ (from semen) be replaced by 'germinal,' or that history should be called 'herstory,' the result is an eye roll. We all sense by now that things have moved. In the last decades, Judith Butler, Richard Meyer and a host of others have noted that black, female, queer, mixed are after all just words, not lived experience.

That "hot house" which constitutes each of our numerous interior realities is not simply a newsworthy or linguistic hook, but a tensile, complex mystery of a thing, not exclusively destined for oppression, manifestly 'other-ed,' nor categorically privileged or exempt from struggle by virtue of race, gender or power.

Capturing the intense, fluid nature of selfhood, as something owned from birth, altered by culture, touched by things like accident, vigilance and social engagement — that's the hard stuff Saar taps into, more than just racial or gendered status.

This idea is addressed in a translucent acrylic head titled “Branblin Blues” that's imbedded with thorny thistles (not the most successful of work here). The same idea might be read in the lovely “Foisom," where Saar peels back the abdomen of a stunning folkish nude to reveal a harvest of fluffy, fecund cotton balls. This sculpture draws on myths common to many cultures regarding humanity's deep, cross-bordered ties to nature (a strong theme here). It unapologetically suggests that women contemplate those ties more, and additionally acknowledges the irrefutable and formative fact of slavery.

That Saar's works make sopisticated references to the feral and fine in all of us, even as they spring from intensely biographic perspectives, does not result in a lack of clarity, rather just the opposite. This is a body of work that has been able to remain vital and authentic from the racially tense 70s to the supposedly ‘post race/post feminist’ 21st century. It retains its capacity to address current realties like Ferguson, Missouri and marriage rights. The absolutely show-stopping work here is “Undone" … if you missed it before this is a must see, and a work better viewed than talked about.