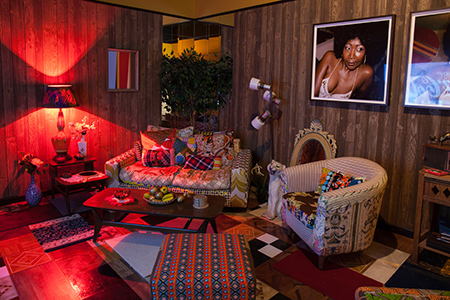 Mickalene Thomas, installation view, "I Was Born To Do Great Things." Photo by: Joseph Rynkiewicz

Addressing race, sexuality and womanhood, Mickalene Thomas’ practice was already a quite personal one. In this exhibition, “I was born to do great things,” the New York-based artist has created her most vulnerable and intimate works to date. Most viewers familiar with Thomas’ works know it for her paintings and photographs of black women, referencing 1970s pop culture tropes with an emphasis on kitsch, glamour and sexuality. The women who have posed for Thomas exude confidence, knowingness and sensuality. Among those women, one has held a distinct presence, Sandra Bush, the artist’s own mother. She has modeled for Thomas since her early start with figurative works fourteen years ago, and many of the artist’s most iconic images are indeed those of Bush, who died in 2012. This exhibition is a heartfelt ode to Thomas' maternal muse.

In the main exhibition space, three of Thomas’ photographic portraits of Bush are accompanied by an installation of new sculptural pieces — all based on Sandra Bush’s personal effects. On the walls are untitled cast bronzes of clothing hanging from cast bronze hangers, the shining metal cloth draping and creased. In works like “Anonymous was a woman,” tables bear arrangements of tchotchkes, makeup and various items of a feminine variety: earrings, bra, “ceramic” statues and lipstick tubes. These have been painted to be minimally distinguishable from the original items from which they have been cast. Thomas’ interests in glam and kitsch are still present in this body of work. However the objects that signify such notions are here loaded with the emotional connotations of having been indexed by Bush’s physical body.

Thomas’ conceptual process is a plain and potent parallel to the task that anyone who’s lost a loved one has had to carry out during the one of the most emotional times in life: sorting through what’s left behind. It’s crucial to note that these works — the sparkling Crocs, the digital point-and-shoot camera, the bejeweled seashell — are editions of three. The original objects have been destroyed. These bronzes both embody the coming to terms with letting go of the things one just cannot keep, as well as a means of keeping those things around forever. The paraphernalia are monumentalized; their material, monetary and art historical values now match their emotional value in artworks that are sublime, solemn and enduring.

If the bronzes in the main gallery are static eulogies, Sandra’s presence remains dynamic in “Happy Birthday to a Beautiful Woman,” Thomas’ 2013 film documenting an interview the artist conducted with her mother before her death. The short film is projected on the wall of the gallery’s smaller project space, within a full scale recreation of the kind of vintage, wood-paneled, patchwork living rooms Thomas uses in her paintings and photographs. The documentary is straightforward, with vintage stock images and family photographs intermingled with footage of an ailing Bush answering questions about the ups and downs of her life: a happy childhood interrupted by a teenage pregnancy; a short-lived modeling career; two destructive marriages; a stint with drug addiction; a buoyant rehabilitation marked by a reconnection to her daughter through Thomas’ art; and Bush’s battle with a long and serious illness. A particularly touching moment occurs as Bush reveals to her daughter that her youthful dreams of being a supermodel have actually been realized via her position as Thomas’ muse. If Thomas’ previous oeuvre was centered on what it means to be a woman, then the documentary and this exhibition of bronze monuments to Sandra Bush’s memory are about what it means to be this particular woman.