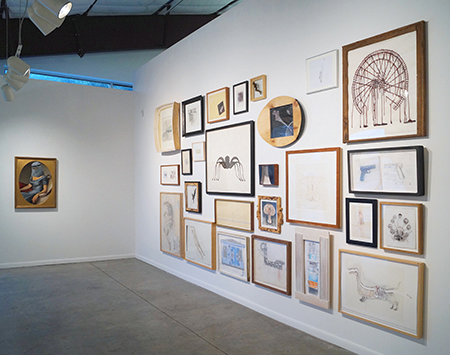 Drawings offer insight into how an artist conceives and develops ideas that lead to final works of art, and in the case of Mel Chin, these documents are particularly invaluable. The drawings, diagrams, and artifacts in this show record a constant flow of ideas. Chin works out his concepts on paper, using drawings to make visible his thoughts on such far-ranging subjects as politics, ecology, science, death, surrealism and violence, among others. Pieces relating to 40 years of creative output are installed salon style in a show that augments Houston’s presentation of “Mel Chin: Rematch,” the major retrospective organized by the New Orleans Museum of Art last year and currently installed at four Houston spaces simultaneously – the Contemporary Arts Museum Houston, Blaffer Art Museum, Asia Society Texas Center and Station Museum of Contemporary Art.

A drawing titled “Reassembled Anatomical Study for Myrrha P.I.A. (Post Industrial Apocalypse)” is a study for a large sculpture installed in New York City’s Bryant Park in 1984. It portrays a seated woman taken from a Gustave Dore engraving illustrating Dante’s “Divine Comedy.” According to Greek mythology, Myrrha disguised herself and had an affair with her father. The Gods turned her into a tree, but she still gave birth to Adonis. Two cryptic architectural diagrams — “Study for S.P.O.R.E. (Sustainable Production Organized in Regard to Environment)” and “Study for S.P.A.W.N., (Special Project: Worms, Agriculture, Nature)” — illustrate how Chin plans his pieces down to the last detail. His propensity to use acronyms in the titles reveals an ironic point of view.

A painting at odds with the rest of the show is “Unauthorized Collaboration: The Student,” a 1957 portrait of a woman by Ronald Lee Anderson to which Chin has added a short burka, the Islamic garment that covers a woman’s face and body. The reference to her as a “student” may refer to how she might be affected by attending a madrasa (Arabic for an educational institution), where she would be forced to cover her face because it is a “source of corruption” for men. This cunning addition to the painting — somewhat Dadaist in nature — raises issues regarding the Taliban and their repression of women.

Despite being referred to as a genius and master of conceptual art, Chin continues to be down-to-earth and largely unaffected by his success. Now 63, he was born in Houston to Chinese parents who owned a grocery store in one of the city’s poorest African-American neighborhoods. From a young age, Chin was intensely curious and always investigating the world around him. Consequently, he has developed a body of work that is perceptive, poetic and profound. But not without a revealing touch of levity.