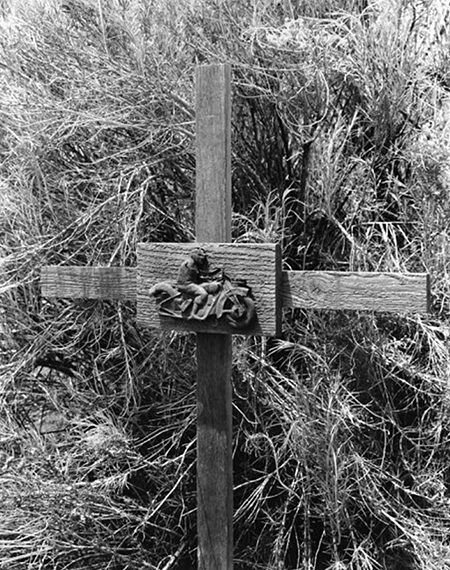 Steven Williams is a Santa Fe-based photographer working in traditional processes. "Legacy of the Landscape" documents lost and forgotten moments, objects and places of the American West. In stunning silver gelatin prints taken with a traditional 8 x 10 camera, Williams’ has captured black and white vignettes hidden in the landscape. The quality of the photographs speak to the artist’s commitment to the analog technology and traditional darkroom processes and is even the subject of one work, “Analog." The image depicts a box filled with lenses and box cameras, and it works as a sort of leitmotif or self-portrait as we enter the gallery. Moving into the show we encounter photographs of cars buried in sandy washes, abandoned, crumbling churches and the carcasses of old mattresses. Williams’ has rediscovered and resurrected these subjects in elegant imagery suggestive of forgotten narratives of dried-up river beds, abandoned roads and the murmurs of people that frequented these locales.

Instead of focusing the lens on the landscape, the oft favored subject of Ansel Adams, Alfred Stieglitz and other prominent 20th century southwest photographers also armed with large-format cameras, Williams’ has dug deeper and discovered minute details that deliver narratives of the past. Quiet tributes to the ephemeral exploration of the southwest, seen in "Crossroads" and “Lasso" present the viewer with a poetic vision of travel and adventure. These symbolic relics intone mystery. Did someone die here? Do they indicate trails for motorcyclists and horseback riders? Are they blessings to keep travelers safe? Viewers will find themselves contemplating such questions while walking through the sunny front gallery.

The functionality of these forgotten objects, broken down, rusting away, succumbing to erosion and the test of nature becomes irrelevant. Yet these places and disposed pieces of machinery are repurposed in other ways, evoking a sense of vitality. In “Special" keys are appropriated into some sort of fence post altar. Car doors and mattresses become fences. A broken down car warns of “no trespassing." The cultural implication implies that in the conditions of the southwest, any piece of junk can have new life and new function. This rusting detritus can also be a source of spirituality. In “Kokograffito," where a spray-painted kokopelli occupies the back of an abandoned building; similarly, in "Arroyo Momento Mori" keys double as holy crosses in a seemingly spontaneous altar. The artist’s lens nudges the viewer to see this reclaimed beauty, to seek out the forgotten details.

By focusing in on the quiet moments and objects found in a given landscape, Williams’ work also engages the viewer in a dialogue of the meaning of boundaries. Where does land begin and end and how does one define these limitations? The subjects favored by Williams convey that these boundaries are fluid and subject to be enveloped by nature. A fence can be a car door, or a mattress, but these limits are only ephemeral. The landscape continues a step beyond these limits and can be seen straight through them, as shown in “Marker." The overall message is therefore that our desire to control or limit nature is arbitrary.

Thematically, Williams’ work places the viewer inside the landscape and showcases fragments of a much larger story. It begins to show a much larger narrative than the typical pristine, untouched landscape seen in so much photography. Williams’ work delivers the cultural and historical implications through the portraits of objects, while still capturing the dramatic beauty of the arid high desert. This is well considered work that, paired with the expert touch and craft of a traditionalist photographer, forms a recipe for some elegant photography.