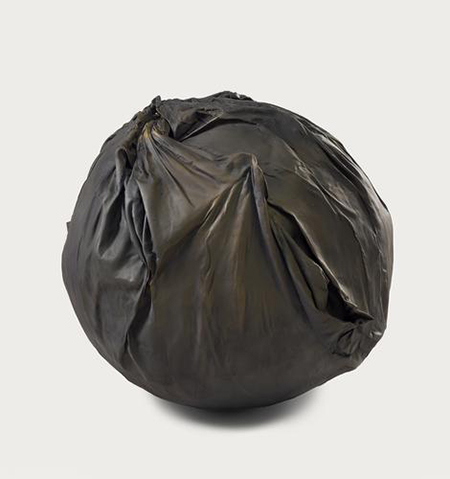 The bronze sculptures of Joseph Havel show that a medium in use for five millennia, and tarnished with the new patina of political incorrectness, may be repurposed and reclaimed to fit the current (and future?) cultural moment. Havel, the director of the Glassell School of Art at the Museum of Fine Arts in Houston, shows five medium-sized works which, despite their modest size and antiheroic subject matter, seem perversely monumental. They’re hollow bronze spheres, or, rather shells of bronze duplicating cloth draped over spherical scaffoldings. They’re ghostly depictions of absence (within a post-minimalist formal vocabulary) reminiscent of the bronze aviator figures that John Battenberg made in the late 1960s, during the time of the Vietnam war, depicting the standing, posing uniforms of pilots from the Great War — flight jackets, helmets, goggles — minus the human figures, as if they’ve been erased by history. (Philip Johnson’s twelve weirdly invisible shrouded figures atop his 1984 high-rise at 580 California Street in San Francisco are more recent missing-man or -woman artworks.)

Havel’s bronze bundles of draped sheets and buttoned-together shirts, however, have no historical or antiwar reading, as far as I can tell, although postmodernist suspicion of reality, let alone transcendence or ideology, might be a factor — so prevalent in the culture by now as to be invisible and undetectable. This is not to say that a work of art cannot be antiheroic or skeptical towards social myths. Art is a large and contradictory environment, and is space for multitudes. Havel’s solitary transmogrified fabric forms with their folds and seams perfectly rendered in patinated bronze, visually heavy, though hollow, may reflect an age dubious of empty ideology, but they also read as surrogate human figures or as reliquary objects.

However we read them, the works are physically and visually commanding. The dark bronze matt finish is recessive, like monochromatic paintings, thus requiring close viewing. Four free-standing sculptures sit on the highly polished wooden floor of the 1911 Willis Polk mansion; one wall piece stands in the gallery foyer. "Golden Moon," almost a yard in diameter, resembles a seedpod or husk pierced by slits and ruptures created by the shirt collars and sleeves having been forced into unnatural positions. "Dark Star," with its lacy, open structure, has botanical associations, too, until we notice that the polygon is composed of men’s shirt collars sewn together. Two pieces are made from bedsheets: “Shimmer" (queen sheet) is a bundle of fabric topped by a twisted ‘tail,’ like a wrapped candy, though large and forbidding — suggesting a homemade projectile. "Black Moon" (king sheet) is another dark spherical bundle, but one that gains in presence through its commanding location across the hallway, a wrapped XXXL Magrittean apple. "Night Standard," the wall-hung piece, replicates the star-spangled shirt worn by sculptor John Chamberlain; here, the shirt is splayed, with some of the stars cut out and the collar dangling loose at the bottom.

A suite of twelve mixed-media full-sheet (30 x 23 inches) drawings, "How to Draw a Circle," hangs in the hallway as well. Executed in graphite, oil-stick and oil paint on paper, they’re Havel’s response to an extended conversation with the poet Dean Young, who wrote an accompanying poem. Havel as an undergraduate student at the University of Minnesota was influenced by the Japanese mingei pottery tradition, which teaches simplicity of form given variety through happy accidents and improvisations. Havel: “[The works] become art, not because of some kind of genius of the artist, but because of activity and balance. The process puts the emphasis on you and your body and the way in which, by repeating your behavior, the behavior is both the same and different.” Havel’s interest in this kind of repetitive unconscious mindfulness is manifest in these experimental, perhaps even subversive versions of Zen ensō (circle) drawings that echo, in graphic form, the ambiguities of the sculpture. Young’s poem, dedicated to Havel, reads, in part:

We come to a stick
pretending to be a snake. Is it not wise
for a snake to pretend to be a stick? ...
My dog
has stopped and is looking at me with
a moon in each eye.