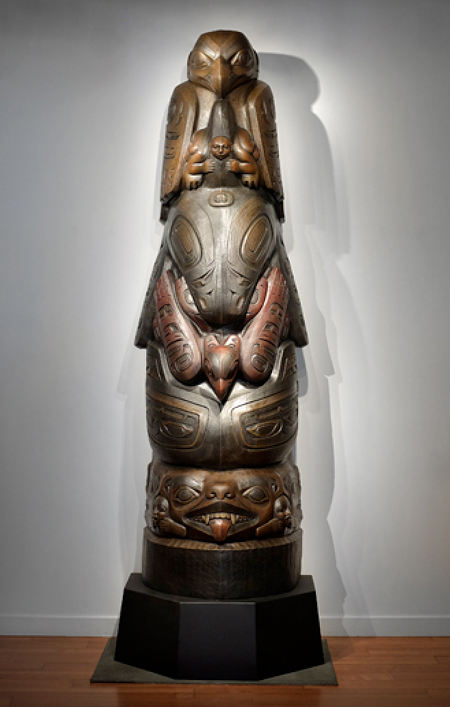 Preston Singletary is among a growing handful of contemporary Native American artists (he is Tlingit) who have managed to straddle several areas of the art world at once: ethnic-specific, traditional art; pioneer Pilchuck Glass School glassblowing; and international multi-ethnic collaborations on installations and studio art. This survey focuses on two dozen shelf- and pedestal glass sculptures, cast-and-sandblasted or blown, wood and cedar bark; and, most strikingly, new full-scale patinaed bronze totem poles.

Educated in Seattle and Venice, Italy, Singletary’s gallery debut in glass was in Bethesda, Maryland in 1991. Numerous shows in New York, Canada, New Mexico and elsewhere were accompanied by prestigious museum group shows in the US, Sweden and Canada including the new National Museum of the American Indian in Washington, DC. His strict apprenticeship and learning occurred under American masters — like Benjamin Moore and Dante Marioni — who themselves had been mentored by Italian masters at Pilchuck and Murano such as Tagliapietra, Ongaro and Signoretto.

While the gallery display reflects the diversity of material approaches the artist has taken, there are reasons cedar has been avoided: Singletary believes “the wood is so scarce, why not let other media carry the traditions?” Color in glass is not the same as vegetable- or berry-dyed color on wood or bark. Whether an appropriation of the original vivid colors now long-faded or a lurid reinstitution of such colors, the viewer expecting traditional Native art of an antique, pale character will be shocked; those open to new interpretations of timeless myths will be pleased.

In “Indian Curio Shelf” flat-bottomed mock-cedar-bark glass baskets are lined up in a row as at the original Ye Olde Curiosity Shop a few blocks away. They slyly echo the historic setting of the building, above an original Indian encampment in the early 19th century. They carry the dramatic punch and glowing transparency of glass. The baskets-on-a-shelf motif may have begun at Ye Olde Curiosity Shop, but among glass artists, it was also Dale Chihuly’s own Salish basket collection that inspired his first works that themselves served as examples for the tight display cabinets of Paul Marioni, Charles LeDray and Josiah McElheny.

Personal expression is subordinated to tribal truth transmission. However, color and medium choices substitute for subjectivities of touch or image distortion. Much could be made of specific weave patterns sandblasted into the “Amber,” “Red,” and “Teal Glass Baskets,” but suffice it to say, they matter because weaving baskets, not carving totem poles, was always the major art form of the Puget Sound, Salish-area tribes.

The polychromed bronzes are at once triumphant and problematic. So associated with dominant white Western culture, these bronzes are better traced to Chinese and Korean antecedents with their earlier “formline” patterns echoed centuries later in Alaska Coastal Art. Intricate patterns and abbreviated human and animal forms are cast into tall stacks or individual pedestal pieces. Similar to the linearity of ancient Asian bronze bells, the Native American surfaces are thus linked to Pacific Asian heritages. A smaller “Killer Whale Totem” is 18 1/2 inches high. The taller version at 106 inches is somber and impressive, its darker patinas lending it a funereal grandeur. With the grave, metallically glinting presence of the dark gold and burnished green, along with the somnolent facial features, “Family Story Totem” purportedly chronicles the attachment of a relative of the artist to an orphaned bear cub. As with the large-scale installations, Singletary has used scale to empower subjective family tales.

Making indigenous art releases the ego tied up with individual artistic expression in favor of a wider, collective surge and cross-cultural impact. Combining private and public commissions as well as mainstream gallery commitments, Singletary’s new work is advancing both glass and contemporary Native American art. He is perhaps now the leading artist doing so.