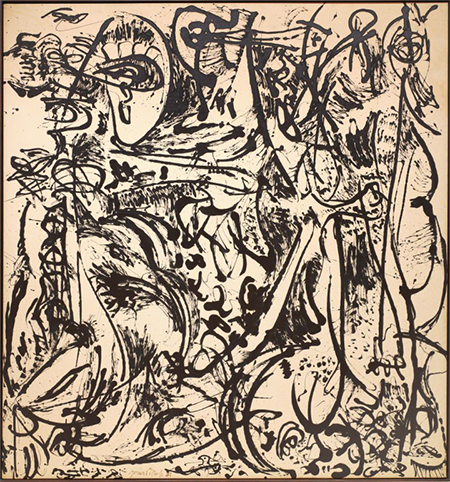 "Jackson Pollock: Blind Spots” is the most significant and art historically important show at this museum in decades. Pollock’s so-called black paintings, the real focus here, were executed beginning in 1951; this exhibition includes thirty-one of them, almost doubling their last appearance together in 1964. In all, for the sake of context, the exhibition chronologically combines the black paintings with examples of Pollock’s breakthrough abstractions from the late 40’s, including sculptures, prints and drawings. It concludes with Pollock’s post-black painting marvels that reintroduced color, for a total of over seventy pieces.

As is well documented, Pollock’s success with his revolutionary all-over abstractions placed him at the forefront of the New York School. For the first time an artist propelled and dripped paint directly onto un-stretched canvas laid out on the studio floor, stepping around and even onto the canvas itself in a kind of performance. This exhibition investigates the aftermath in his career wherein his curiosity and experimental temperament led to an exploration of monochromatic painting almost exclusively on unprimed canvas. The artist retrieved something unmentionable during the time of high abstraction, traces of the figure and calligraphic symbols and shapes.

At the time these paintings were misunderstood, unsuccessful within the gallery system and collector apparatus alike, and almost forgotten, overshadowed by Pollock’s prior achievements. This exhibition is thus a much needed reassessment of the black paintings, ultimately arguing that they were not only masterpieces, but an inspiration to subsequent artists who were sensitive enough to see that they pointed the way toward both a renewed figuration and, in the abstract realm, a pure, flat, proposition of black paint and monochrome fused into the support, coming together as one. Going a step further, they helped inspire an exploration of staining unprimed canvas, thus leading to the color field painters.

Gavin Delahunty, chief curator of contemporary art at the DMA, was responsible for the idea and execution of the exhibition. It opened at the Tate Liverpool and traveled here to the only venue in the United States, where he rightly claims viewers will experience “the definitive version of the exhibition.” This refers to the fact that Delahunty was able to secure far more black paintings for Dallas, where he also had the freedom to completely reconfigure the galleries, which are designed to recreate the visitors’ 1950’s experience. The rooms are carpeted, furnished, and more intimate than the spaces we typically walk through these days, so as to place the paintings in context to the original and exact gallery walls at Betty Parsons and Sidney Janis. Through documentary research for example, four canvases (“Number 5,” “2A,” “2B” and “2C”) are arranged here just as they were over sixty years ago in Pollock’s first show at Janis in November, 1952. This group is presented in the penultimate room that also brings together Pollock’s reintroduction of color to the stained canvas. It makes a persuasive case for the deepening breadth and range of his aesthetic practice.

This exhibition starts big and ends bigger, targeting the viewer with what seems like a never-ending stream of compelling and powerful images.  The scholarly exhibition catalog paves the way; it will be around far longer than the exhibition so see it now before it comes down for good. It will be the last chance in our lifetimes to experience this treasure trove.