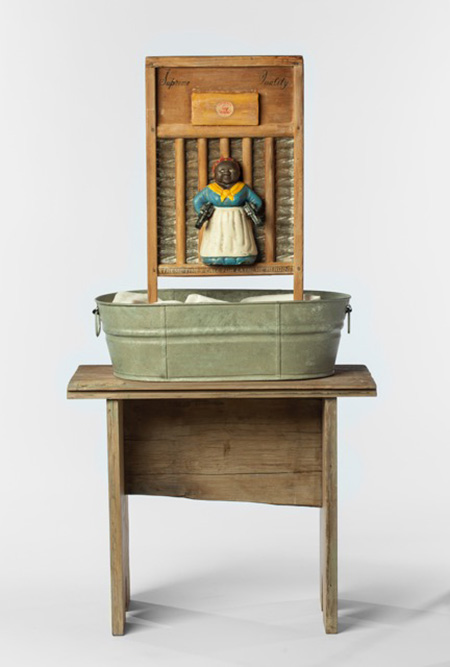 Betye Saar is undeniably a preeminent African-American artist, willing to mine our country’s racist history and its resulting iconography to create powerful mixed-media assemblages and installations. Approaching her 90th birthday, Saar is, as the title of this retrospective suggests, “Still Tickin’.” Saar is prolific and her art continues to respond to current events. No vintage bric-a-brac, rusted objects, worn furniture or archival photographs are off-limits. Many objects are resurrected from a time when objects bearing derogatory images of blacks were manufactured. In addition, Saar collects items such as globes, birdcages, scales, washboards and ornaments, takes note of their “energy,” and artfully finds the arrangement that imbues them with a sociopolitical, spiritual or memory-laden charge.

This Los Angeles artist’s wide-ranging show — which covers six decades — arrives fresh from Saar’s first museum solo exhibition in Europe, held at De Domijnen (formerly Museum Het Domein) in Sittard, The Netherlands. The current installation provides plenty of space and takes Saar’s direction in such facets as painting walls in intense colors, suspending works from an open ceiling and creating a couple of small rooms for related works that merit quieter study. An all-red room, for instance, contains a powerful work with “mammy” figurines decorating an old spice cupboard, except for the spaces where small wooden blocks form the word “liberate.” Nearby is the installation “I Will Bend, But I Will Not Break” (1998), where Saar uses — as she often does — the stamped image of blacks crammed in a slave ship, this time on a wooden ironing board jarringly placed in front of a crisp white sheet monogrammed with “KKK.”

The mood shifts in “The Alpha & Omega” Room, painted an aqua blue, where a birdcage-based assemblage symbolizing the Jim Crow era, along with other works, conjures a sense of transcending space and time. Or perhaps it’s the idea of being submerged, given the skeleton of a canoe that hangs from the ceiling. The main gallery spotlights Saar’s interest in mysticism, ritual and spirituality. The installation “House of Fortune” (1988) has been tweaked for the desert by the addition of tumbleweeds to enclose chairs and a table, as tarot cards swirl around them.

In addition, the retrospective gives considerable attention to cloth-based works, especially those which superimpose archival family photos onto well-used handkerchiefs. Then there is Saar’s response to our country’s most recent racial tensions in a series of assemblages from 2014-15 with titles such as “The Weight of Persistent Racism” and “The Weight of Betrayal.” The works re-appropriate kitchen scales, watermelon slices, chains and other objects as a conduit for anger.

It’s not unusual for viewers to be shaken, or conversely indifferent to her messages according to Saar, “but when you get over 80 years old, you want to find out what the payback is, what you can give to share to the planet, and I like to think that my art does that.” No doubt.