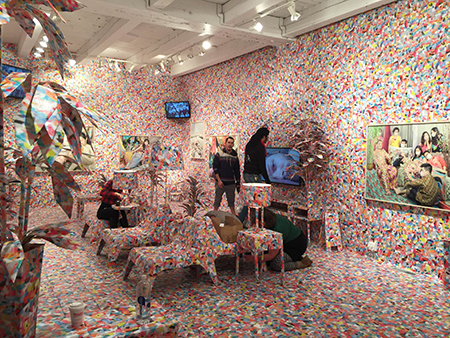 Leonard Suryajaya, "Don't Hold On to Your Bones," 2016, installation at the Chicago Artists' Coalition

CAC resident artist Leonard Suryajaya’s “Don't Hold On to Your Bones” is a visually and aurally overwhelming installation. From ceiling to floor, the artist has wallpapered CAC’s back gallery with brightly patterned, abstracted paper squares, but it’s not just the vertical surfaces that have been plastered with this busy, candy-colored treatment. Upon these papered walls, a papered telephone with papered buttons is installed, with a papered clock and a papered fire extinguisher. On the papered floor a suite of side tables, chairs and a credenza are all covered with Suryajaya’s patterns; even the small, indoor tree has been enveloped, as has even a single, fallen leaf.

Hung on the papered walls of this room is a suite of Suryajaya’s photographs, themselves often visually complicated compositions full of colorful fabrics draped behind members of the artist’s family and Asian school children posed in dramatic, enigmatic situations. From all corners of the room, mounted television sets play a loop of video featuring school children in matching uniforms, singing in unison with their mouths propped open with the kind of clear plastic dams one would be fitted with at the dentist. The children struggle through three patriotic songs composed in different keys: “This Land Is Your Land,” “The Star-Spangled Banner” and “America the Beautiful.” The video loops are staggered, and at any given point in time, the tones emanating from the televisions combine and are cringingly dissonant.

After becoming as adjusted to this overstimulating environment as one can, a viewer’s eyes find respite in a larger screen positioned in front of a pair of papered lounge chairs. On this screen, more of Suryajaya’s videos loop, though these works are of a very different nature than the installation that surrounds them. In one piece, the artist’s mother sits crying in a chair as Suryajaya asks her questions about what it’s like to have a son who is gay. She answers him, expressing her fears about the threat of violence gay men are subjected to both in conservative Indonesia, as well as the United States. In several other video works, a blond man is the center of attention as he’s teased, prodded and questioned by the artist behind the camera; we gather that this young man is a new boyfriend. Here, Suryajaya is masterful at capturing candid, private, uncomfortable emotions from his loved ones, whether it’s asking his mother whether she’s ashamed of her son, or whether the artist is in bed with the blond man, asking him if he’d get him a green card.

These intimate stories are at odds with the unrelenting energy of the rest of the room. The quiet pillow talk and already muffled sobs get drowned by the cacophony of singing voices. Concentrating on the continuous, close-up scenes is almost impossible with the other TVs and the wild colors congesting one’s peripheral vision. Suryajaya loads up his works with a lot of content: ritual, nationalism, prejudice, difference. But, love, romantic and familial, is the most potent of all the components in “Don't Hold On to Your Bones.” At the crux of this exhibition is the arduous sensation of trying to see, hear and understand that love against a barrage of incessant, unignorable issues.