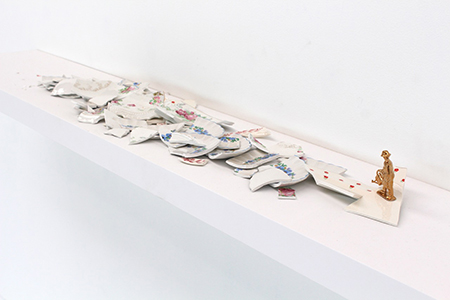 Liliana Porter’s current gallery show coincides with her exhibition at the Arsenale in the 57th Venice Biennale. Porter’s Biennale installation, “Man with an Axe and Other Brief Situations,” is arranged on three platforms placed in a U-shaped formation. Like other pieces in the "Man with an Axe" series, a tiny male figurine with an axe confronts a huge array of objects in various stages of destruction. Porter’s clever manipulation of found objects, toys and figurines that sometimes interact with one other in her vignettes elicit emotional reactions. The relationship between a youthful football player holding a soccer ball and a small dog sitting on a pedestal (“Untitled with Football Player”) speaks volumes about the bond between man and dog. The dog is alert and staring at the boy, waiting for his command, while the boy’s affection for the dog is expressed in a grin that causes his cheeks to puff up endearingly.

Porter’s particular genius begins when she plucks a certain tchotchke from among vintage objects at secondhand stores and flea markets in and around New York City. She keeps her “cast of characters” in cabinets in her studio and uses them repeatedly. For example, the silhouetted female figure in “The Lecture” appears in one of Porter’s videos. In this piece, the woman “lectures” a small French poodle, which gazes at her with rapt attention. Porter utilizes austere backgrounds to focus attention on her subject matter. In “Dialogue with Salt Shaker,” a black-and-white photograph is empty but for an image of a young child in the lower right-hand corner. The girl is being observed by an actual Chinese figurine perched on a small shelf attached to the frame.

The Buenos Aires-born artist uses scale to convey her empathy for the human condition, often creating situations where a figure is overwhelmed by the enormity of a job. For example, in “The Gardener,” a figurine waters a small corner of a huge pile of broken china, all of which are decorated with floral patterns. In “Forced Labor Rope,” a tiny figure begins to wind up a monumental tangle of rope hundreds of times larger than he is. Her theatrical vignettes express both a humorous outlook on life and a compassion for those less fortunate. In Porter’s words, “I am interested in the simultaneity of humor and distress, banality and the possibility of meaning.” There is more than meets the eye in her seemingly naïve tableaux, and a great deal of gratification in discovering them.