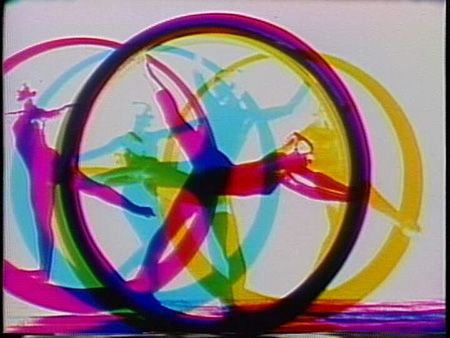 That said, it’s heartening to see the Henry playing catch-up with the Museum of Modern Art, New York, and other noted institutions that gave Chase retrospectives during her lifetime. The difference with Croquer’s selection is his inclusion of over one hundred gifts of Chase’s works on paper, sculptures and videos from her and her sons, showing everything in the same place. If anything, the survey elevates Chase’s early paintings and small-scale sculptures into a cherished realm: things that sculptors make before, during and after their forays into three dimensions.

Full disclosure: I worked sporadically as a personal assistant and adviser to Chase for a few years over 15 years ago, when she returned to Seattle after 35 years in New York. In New York she resided at the Chelsea Hotel, where she established herself as a pioneering dance-video artist. All that had begun in Seattle, with her early experiments on the Boeing Co. computer, drawings of which are on view along with more Northwest School dark landscapes from the 1950s and 1960s.

Such paintings, though less original than what was to come, led to her first shows in New York, Rome and Tokyo. Reviews in ARTnews, Artforum, Village Voice and the New York Times responded favorably to her work, and she became an important participant in the growing downtown art and dance scenes. Aged 67 when she returned to Seattle the first time, and 80 when she moved back for good, Chase’s reputation was by then well established. She was regularly included in subsequent group shows chronicling the rise of American and European video art.

Through a series of donations and gifts to regional art museums which I facilitated for her, Chase settled into a sequence of local interviews, feature articles and profiles “rediscovering” her. Having watched older artists revive themselves in New York, Chase knew well she had to cultivate critics and curators. Elizabeth Brown, a former Henry curator, responded most enthusiastically, and the credit goes to her for the University of Washington museum acquisitions.

Chase’s two major public art pieces in Seattle, “Changing Forms” (1969) and “Moon Gates” (1999), join nine other works scattered across the country. Her “Moto” (1970) graced the Washington State Pavilion at the Osaka World’s Fair. However, in the Henry survey, we see not only the origins of both her large-scale sculptures but how the sculptures led to the videos — as props for the dancers. These have been written about extensively in major studies by Gregory Battcock, David Antin and others. Marshall McLuhan pointed her out in his canonical works, “Understanding Media” and “The Medium is the Message” (both 1967).

On view in a carefully placed series of monitors, the dance videos look ravishing along with a wall-size projection of the early masterpieces, “Circles I” (1970) and “Circles II” (1972). Working closely with Seattle filmmakers Frank Olvey and Robert Brown, Chase overlapped and layered color and dance into previously unseen mélanges of electronic hues, hand-standing bodies, and specially commissioned scores by leading composers Morton Subotnick, Joan LaBarbara and George Kleinsinger.

When I delivered one of the eulogies at University Unitarian Church in Seattle at her memorial in 2008, I proposed that a new Northwest School or “Big Four” be assembled; instead of Mark Tobey, Morris Graves, Kenneth Callahan and Guy Irving Anderson, Chase should join Merce Cunningham, John Cage (who lived in Seattle in the 1930s) and Graves (who collaborated with Cunningham on the sets and costumes for “Inlets”). Not mystic, but techno-oriented, avant-garde (there seems no link between dance and music in Chase’s videos, as with Cunningham), and tied to Seattle’s innovative underground culture of the 1960s, the new “Big Four” merit a wholesale rewrite of Northwest art and cultural history. Doris Chase’s latest survey — her ninth solo art museum show — is a good place to start.