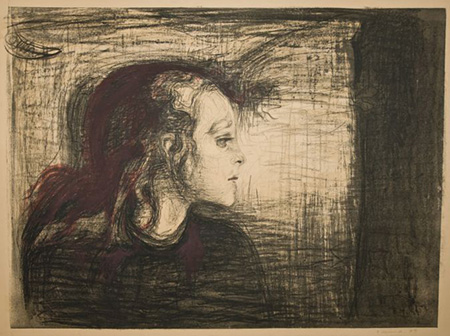 Edvard Munch (1863-1944), creator of "The Scream," and one of the founding fathers of Expressionism, is the subject of a current show at the San Francisco Museum of Art, "Between the Clock and the Bed," the title of which comes from a late self-portrait, and neatly summarizes the artist’s main concern with those Romantic warhorses, Love and Death (apologies to Woody Allen). Viewers of that painting show should not pass up the complementary print/drawing show at Modernism, adorned with Munch’s fervent words from his diary, amounting to a manifesto, to depict beings who Breathe, Feel, Suffer and Love.

The etchings, woodcuts and lithographs in this museum-quality exhibition are as astonishingly free in technique as his paintings are, while recapitulating — whether from obsession or good business sense; probably both—many of the themes and motifs to be seen in the oil paintings. The creative process worked the other way, too, according to the gallery notes. (Incidentally, the prints are flipped, left to right, because of Munch’s choice not to compensate for the reversals of printmaking processes).

There’s no version of "The Scream" here, but many of the Nordic Van Gogh’s greatest hits do show up, no less expressive or emotion-laden than the paintings: “Madonna," the ghost-white woman in sexual ecstasy, based on, it’s thought, Munch’s mistress, married at the time to one of his bohemian colleagues; "The Girls on the Bridge" and “Puberty," both depicting young women in mysterious transition; and several images of embracing couples, including “Vampire" (originally entitled "Love and Pain), with the woman’s red hair enveloping the man. Tendrils of  red ivy cover a house in "The Virginia Creeper.” The nude couple of "The Kiss" merges faces and forms to obscure their individual identities. Munch also looked unflinchingly at death, as in "The Sick Child I," based on the fatal TB of Munch’s sister Joanne Sophie; insanity, in "Laura II (Melancholy)," a portrait of his mentally absent sister, Laura; and disease, in “Inheritance," a Lautrec-style study of a mother with her dying child. Several drawings and pastels are included. Strong stuff in every sense.