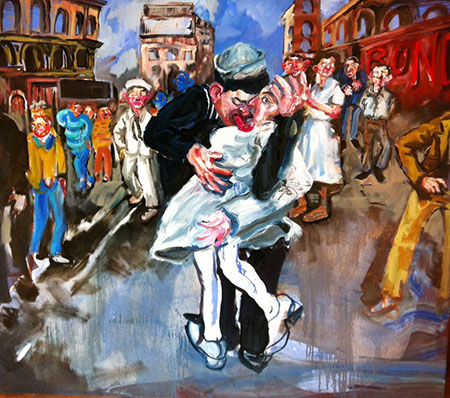 The giveaway titles, however, reveal Mack’s motives about repainting art history. For example, “Norman Rockwell Project” involves four works savaging his sappy, wholesome canvases. “Lice Check” parodies the “Saturday Evening Post” illustrator’s “Mother Curling Her Daughter’s Hair” (1970); “So You Want to See the President” spoofs a drawing of the same title, but with someone who resembles White House gatekeeper General John Kelly; and “From Concord to Tranquility (Astronaut)” is a warped version of Rockwell’s astronaut portrait magazine cover with Boy and Girl Scouts from 1973. More gruesomely and most effective, Mack’s “Freedom From Fear” posits a mother and father putting two children to bed as in Rockwell’s 1943 painting of the same title. The difference is, in Mack’s painting (closer to an Edvard Munch, really), the children are clearly corpses.

Viewers can have a pretend-art museum stroll in the gallery, wandering from one faux masterpiece to another. On one wall, the Norman Rockwell of photography, Alfred Eisenstaedt (who worked for LIFE magazine), is skewered in “Assault on Times Square.” His iconic snapshot of the sailor kissing the nurse, “V-J Day in Times Square” (1945) is turned into a vicious rape with a bloody monster face plunging into the hapless girl. Indifferent passersby walk past the couple.

Art-historical wise guys, Mack’s people inhabit her world immersed in a blizzard of color, brushwork and urgent attack. While some of the pictures allude to earlier art, others combine the backward glances with up-to-the-moment applications. For instance, “Rorschach Test for Hugh Hefner” contributes to the explosive blowback after the “Playboy” publisher’s death. Her small canvas (30 by 30 inches) crams together three sets of “Playboy” bunnies’ legs and backsides facing the viewer: it is a burning, pink-and-blue bruised version, lifted from a black-and-white London tabloid photo of 1978, that comments on the Playboy Club opening in the UK. “Civil War Re-enactment #2” draws attention to white supremacists in the North as well as the South, including Washington State. One “soldier” appears to be sitting in a director’s chair watching the faux-carnage. The American Civil War is a touchstone and a warning for the divisions within American society today. The re-enactments suggest everything is staged and filmed for instant consumption, constantly recycling actions and images of grievance and resentment over past “defeats.”

Although there are explicit art-historical references throughout, including to 19th-century Americans Edward P. Moran and Charles Willson Peale, Mack’s most successful series and the one that has attracted the most attention is her “Tributes to Betsy Ross,” which is represented here by a very large version (“#6,” 68 by 72 inches) and a very small one (“#10,” one foot square). Over and over, Mack reworks the original by J. L. G. Ferris, a solemn group that stares at the stars and stripes. In Mack’s devilish hands, Larry Rivers comes to mind, with his mock-historical Americana of the late 1950s and early 1960s, now considered forerunners of Pop art. Like Rivers, Mack smudges and defaces the figures, distorting limbs and appendages into grotesque exaggerations. Her approach further crops, crams and shoves the components into tighter places, with the colors and forms in the smaller “#10” intensifying the display and exposure of another loaded icon, the first American flag.

“The Curator ('History Paintings Project’)" takes on Peale’s “The Artist in His Museum” (1822), a famous view of the American artist’s private art collection, a self-portrait lifting a big red curtain to display important cultural trappings — everything the U.S. was trying to attain  as a civilized nation early in our history. Mack replaces artworks with the faces of art collectors and politicians. Who is collecting whom, one might ask? Acting as a metaphor for the entire undertaking, “The Curator” is also Ray Mack’s persona: she is toying with our recognition of older art, our entrapment in the present when art history itself is under assault as authority; and our willingness to indulge her thick paint and ironic scholarship in order to reconsider the past while contemplating analogies to our present, troubled moment.