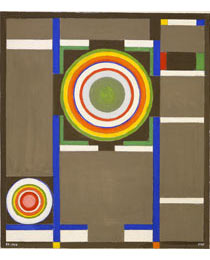 The sharply rendered edges and curves displayed in ”Constructive Spirit: Abstract Art in South and North America, 1920s-50s” tend to bypass our cogitating craniums and send arrows straight into our collective, pumping heart. Moreover, we discover that the means by which we “think” — at least in part — is via shapes and form and, thus, our psyches are organized in ways Aristotle would not have recognized. And that’s a good thing. While this particular show is rife with spectacular individual paintings, film, photography and sculpture, I suggest you choose a handful of pieces and spend time with them. Let them work on you the way Tibetan monks blissfully concentrate on mandalas. And just as those questing souls are psychologically and emotionally honed, so will you be.

One place to start this new and engaging enterprise might be John Ferren’s oil-on-canvas painting, “Paris Abstract” (c. 1935). It’s a brilliantly rendered piece that vaguely resembles a Mobius strip that’s been deconstructed. Orange, purple, red and gold are juxtaposed against a dark background. It seems as if we’re peering inside a construct that’s unrecognizable as a typical object. Yet we sense its sophistication, its cosmopolitan jazzy context, and when our gaze is delivered to the bottom right of the painting it’s as if we’ve slid from the interstices of the entire construct and emerged whole and beaming. It’s finger-snapping cool and it’s a fabulous example of what Alejandro Otero described as the new language and new reality that is constellated by abstract art.

Another piece worthy of attention is Joaquín Torres-García’s “Locomotora con casa constructive (Locomotive with Constructive House)” (1934). It’s a smudgy amalgamation of gray, steely-blue, mucky reds and tarnished gold. We see a shape at the top — the apex of the painting as it were — that suggests the roof of a building. There are also emblematic traces of a train: spokes, a circular image that could signal an oncoming train, and numbers that are suggestive of tracks and scheduled arrivals and departures. There’s an operative trope of movement residing in static shapes. Even the curly line that might bring to mind the smoke of a roaring locomotive is subdued. It’s not a train; it’s the idea of a train. Or, more exactly, the feeling of a train and its concomitant station; it’s rendered such that we can smell the oiliness and the exhaust of every train we’ve ever traveled on. This isn’t the first-class wagon that Vladimir Nabokov praises in his memoir, “Speak Memory.” This is a gritty, ride-with-the-chickens kind of commute.

“Constructive Spirit” instills in us an appreciation of the magic and allure of Euclidean geometry and its potential to help us re-imagine the world via non-representational forms. The aforementioned “mandala” is something I find apt. One way of approaching this laudable exhibition is by analogy — specifically mysticism. For instance, one could think of these works of art as somewhat similar to a form of mysticism sometimes referred to as the via negativa, in contrast to typical representations freighted with readily apparent spiritual meaning. This art, like the mystical route, tends to bypass the well-traveled road and head out to parts unknown, not by utilizing yet another recognizable path — but, instead, using the (even more) adventurous vector of verticality. It’s telepathy versus being told a story. Open your mind by seeing it first hand. Or, better yet, let yourself feel it.