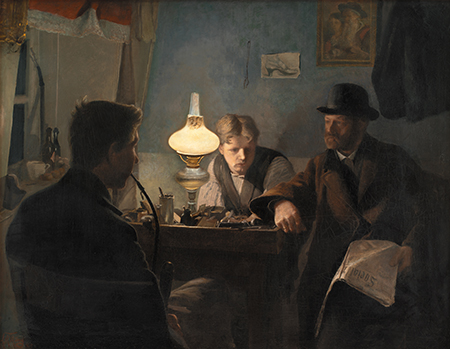 A retrospective of the overlooked late-19th-century Danish painter Laurits Andersen Ring (1854-1933) situates the artist half-way between Romanticism and Modernism, Ring’s technique and subjects are very much 19th century: rural, landscape, crisp realism, and hints of mortality and impending doom. It’s all in line with Danish art of the period. However, the survey demonstrates that the artist adjusted to the times, including clear-eyed images of technological and social progress, e.g., a railroad crossing, electric vs. lamplight, and the idolatry of the peasant class in a time of thwarted revolutionary fervor.

Organized by the National Gallery of Denmark, “L. A. Ring: On the Edge of the World” underscores the artist’s long journey from brooding childhood fantasies, through oblique political commentary, and on to placid, if cloudy, landscapes of winter and springtime scenes in the various tiny villages he and his family moved to in order to attain quietude and serenity. Ring changed his name to that of his hometown, studied at the establishment Royal Academy, took the requisite Grand Tour to Italy, and ended up a respected Grand Old Man of Danish art. The journey he took reflected his cultural interests in atheism, weather, topography and the symbolic potential of realistic scenery and portraiture.

Each painting may be read on a number of levels, all reflecting one or more of the five themes the curators describe: “Revolutionary Dreams; Death; Love; Landscape; and Thresholds.” In addition, curators and art historians attempt to make the case that each painting is also autobiographical, detailing a family death (à la Munch), technological change (railroads connecting to cities), and highways. Without guidance from the catalogue, the autobiographical reading is hard to decipher. Instead, we can think of Ring as alternately a Danish Millet (“The Sower,” 1910); a Danish Symbolist (“Evening,” 1887, depicting a Grim Reaper in the clouds above a seated milkmaid); or the Danish equivalent of American artists as diverse as Winslow Homer and Grant Wood.

Despite his travels to the Paris World’s Fair of 1889 and his subsequent years in the Italian countryside, Ring rejected blurry Impressionism in favor of a rigorous, drawing-based image and dry brushwork. He shared their interest in the subject matter of everyday life, but without leisure-time activities like picnics. “Harvest” (1885) is a sunny scene of threshing grain, though Danish commentators read it as another Grim Reaper image. “Drain Diggers” (1885) is resolutely proletarian with its heroic ditch-diggers in bright sunlight. “A Child Visiting Grandparents on a Sunday” (1898) pokes fun at Bible-reading elders boring a young boy. Even the innocent (and all-too-familiar) subject in “Has It Stopped Raining?” (1922), an old man peering out a doorway, is described as “supernatural realism.” I don’t see the same eerie qualities, but I do appreciate its sense of anticipation and uncertainty.

The landscapes have a refreshing quality of relief and enlightenment. They connect Ring to Homer and Wood, both of whom used American scenery to relate ideas of hard work and conformity. “Thaw” (1901) recalls Andrew Wyeth while “Rye Field Near Ring Village” (1887) anticipates a two-part Rothko “cloud” painting in its stormy skies. “Landscape Near Bryrup, Jutland” (1888) refuses sunny French influences, sticking to its sodden marshes and leaden air-space above a pristine lake. Ring’s landscapes are more documentary than impressionist in character, even though he painted en plein air for a period of time before shifting to imaginary recollections of views near his home villages and domestic interior spaces.

It was in the late “threshold” paintings containing human figures, often friends and family members, that Ring attained his greatest achievements, combining intimate autobiography (a pregnant wife in “At the French Windows,” 1897); latent political content (“At the Shoemaker’s Shop,” 1885); and a reversal of French Impressionism’s local-daylight fetish by beginning dark interiors with exterior light seeping into the scene of a mother and daughter (1901). Influenced by Symbolist and Realist writers in the Copenhagen intellectual and artistic milieu he frequented, many of Ring’s subjects chimed with their short stories and essays about the poor. Treated with dignity and respect, his sitters attain a shriveled monumentality more akin to Käthe Kollwitz than Manet or Renoir.

Ring’s American debut wasn’t until 1927 when he was seen at the Brooklyn Museum in a Danish art survey. The year before his death at 79, he was the featured artist in the Danish Pavilion at the Venice Biennale of 1932. Now we learn more about a significant artist who assimilated modern life while rejecting much of the more radical tendencies of early modern art.