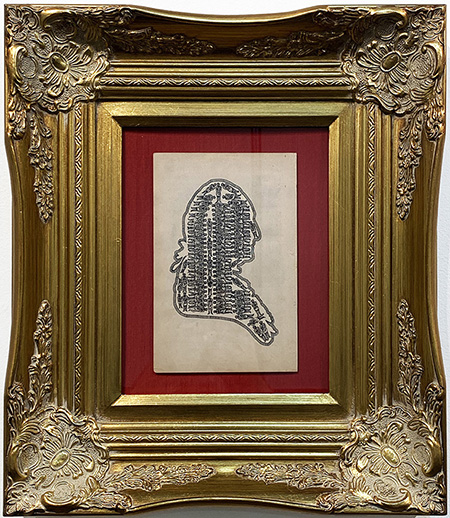 Visible reminders of the ongoing fight for racial justice in America abound, as protesters march against police brutality, people recount the legacy of civil rights icon John Lewis, and community organizers work towards ending systemic racism. Artists are on the front lines, too. They’re elevating social justice issues through works that confront America’s past, prompt conversations about the present moment, and imagine a future stripped of racist ideologies and power structures.

Among these artists is Chris Revelle, a multidisciplinary artist who creates socially-engaged and politically-focused work. Most recently, he’s focused on slavery, including its ties to America’s origins, its existence before the Civil War, and its manifestations following adoption of the Thirteenth Amendment. Understanding his work requires careful consideration of the language of that amendment, including the following passage: “Neither slavery nor involuntary servitude, except as a punishment for crime whereof the party shall have been duly convicted, shall exist within the United States, or any place subject to their jurisdiction.”

Revelle’s newest work, an installation titled “Swing Low,” addresses the ways systemic oppression continued after the war, as Southern states adopted “black codes” that marginalized and criminalized Blacks. The laws led to a convict leasing system that resulted in Blacks being forced to work in coal and iron mines. “The industrial new South was built on the backs of black bodies through violence and exploitation,” Revelle writes in his artist statement for “Swing Low.” For this piece, the artist started with the pickaxe, an object he describes as “the instrument of profit and torture in the mines.” First, he cast large-scale pickaxes using bituminous coal and wax, which reference both Black bodies and their labor. Then he drew a series of Southern courthouses, buildings which served to advance racism even after the slave auctions once held there were outlawed.

His installation comprises several pickaxes suspended in the center of a gallery space, where they conjure images of lynchings undertaken amid a mob seeking so-called justice. Revelle surrounds the sculptures with his drawings, made with remnants of other pickaxes that wore down and crumbled as the artist labored to replicate the Southern courthouses he implicates in promulgating the neo-slavery that helped to fuel the wealth of rising industrialization. With “Swing Low,” Revelle brings a powerful visual presence to contemporary conversations about criminal justice reform, generational wealth, and other social justice issues.

Through his larger body of work, Revelle addresses additional themes at the heart of current protests, including the call to remove Confederate monuments from public spaces. For a 2019 word titled “Graveyard,” the artist explored the ways that historical and contemporary speeches and writing reveal the racism rooted in American society. “The speeches, essays, declarations, and books by white Confederate, Southern, and Lost Cause politicians and writers unmasks their beliefs and intentions,” Revelle wrote in his artist statement for this piece, which comprises stone rubbings of racist language on imagined monuments. Revelle framed the large-scale graphite and paper rubbings, then tied them to wooden pallets using ratchet ties as a way to replicate the process of removing and relocating Confederate monuments. That same year, Revelle created a work called “Living Monuments,” using pro-Confederate books and lesson plans as source material. Revelle made resin casts of Jim Crow-era books, concealing the original text but adding words culled from speeches and writings by James Baldwin, then considered highly controversial, but today renowned for fearlessly calling out white supremacy.

Revelle’s work also addresses the hypocrisy inherent in the lives of America’s early leaders. Although the Declaration of Independence includes the words “all men are created equal,” for example, both George Washington and Thomas Jefferson were slave owners. It’s a topic that’s garnered renewed public discussion, as the musical Hamilton has fueled debate about the founding fathers. Modern-day civil rights leaders like John Lewis have been hailed as the founders for a new America. For “The Foundation,” Revelle used ink on paper to hybridize a silhouette portrait of George Washington with the diagram of an 18th century slave ship, creating a framed 16” x 14” work that speaks to slavery’s many iterations and impacts.

As protesters continue to march for racial justice, Revelle’s compelling body of work punctuates the role that artists can play in advancing the cause. “I want my work to have a visual impact,” Revelle says. “I hope it encourages dialogue and conversation.”