Ian Schrager and the Boutique Hotel
Profile
by Richard Speer 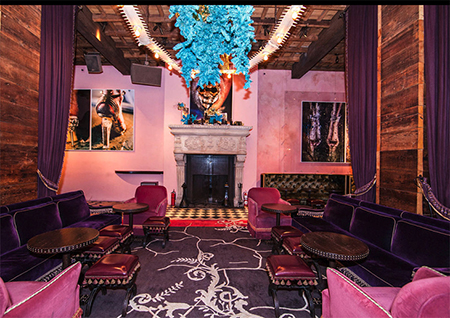 For 14 days last month, my partner and I secluded ourselves in a log-and-fieldstone cabin up in the Mt. Hood National Forest, with no cellphone signal and no Internet. The soundtrack of our fortnight was the gurgling of a snowmelt creek thirty yards away, our wallpaper an expanse of picture windows opening to a fairyland of firs and moss. Absent the snares of web-surfing, scrolling, and toggling, we did a lot of writing and reading in that pre-digital paradise. In such a rustic setting it felt particularly incongruous to read one of the books I’d hauled along, “Ian Schrager: Works” (Rizzoli, 2015), for Schrager’s aesthetic is the antithesis of rustic. Over the course of a nearly half-century career as a real-estate developer and hotelier, he has become famous and quite wealthy for creating serenely elegant bastions of urban cool, perfused with cutting-edge design and groundbreaking taste. After making his name in the 1970s as co-proprietor of the notorious discotheque Studio 54 (plagued by financial indiscretions that earned him 20 months in federal prison for tax evasion), he bounced back in the hospitality industry with a string of high-profile and visionary hotels, which redefined luxury for an aspirational, hip, art-savvy clientele.

I had never heard of Schrager until I attended Art Basel Miami Beach in 2004 as a guest of art collector/philanthropist Justin Oswald. A group of lucky friends and I stayed in Oswald’s suite at the historic Delano Hotel, which Schrager and designer Philippe Starck had completely reimagined nine years earlier. Schrager and Starck managed to turn a down-and-out 1940s relic into a pristine wonderland of marble, billowing white fabric, eccentric furniture, and dramatic lighting, all set to an opiated downtempo/techno beat.  The environment not only looked fantastic, it made you feel fantastic. The place enveloped you in an aesthetic cocoon, a Gesamtkunstwerk. What’s more, it fulfilled Schrager’s secret superpower: it made you believe, if only for the duration of your stay, as if you were one of the chosen few allowed entrée into a dazzling, exclusive enclave.

This was Schrager’s concept of a “boutique hotel,” the antithesis of those selfsame Ramada Inns and Hiltons that for decades delivered guests the same comforting but stultifying experience whether in Tucson or Toledo. Boutique hotels offered an experience unique to their locales. As Schrager puts it in his introduction to the book, they “manifested the social fabric of life in the city [and became] a microcosm of the best the city had to offer.” After falling under the spell of the Delano, I made a point to check out some of Schrager’s other properties, among them The Shore Club (also in South Beach), The Mondrian (West Hollywood), The Clift (San Francisco), The Hudson (New York), and Gramercy Park Hotel (also in New York and a collaboration with the redoubtable Julian Schnabel). I came to respect him not just as a designer of space, but as a curator of ambiance itself, for no matter how elite a building’s provenance, it’s just a foundation holding up cladding unless it engages our fascination and invites us to project our inner experiences into its every nook and nave. This is Schrager’s forté.

Like anything successful, his style was widely copied. At this late date it has become the template for a host of other upscale chains, among them The W, The James, The Standard, The Hoxton, and Le Parker Méridien. “I have created a Frankenstein monster,” he writes. “Hotels are all starting to look like each other again.”

In recent years, now in his early 70s, no longer the wunderkind of Studio 54 but one of the industry’s elder statesmen, he has begun to do something curious. He has stopped working with Philippe Starck and began enlisting designer John Pawson and Herzog & de Meuron Architects. In his recent EDITION and PUBLIC property brands he has traded a design ethos of eccentricity for cool minimalism, bold colors for soothing ecrus and eggshells. The scenester has turned epicure. There’s a discreet vase of fresh roses on the bedstand and a sumptuous faux-fur throw over the divan. Gone are the quirky chandeliers, replaced by the soft glow of recessed lighting. It’s not so desperately aspirational and trendy anymore, not so much about getting through the velvet ropes to see and be seen at the right table in the right clubs. It’s now more like: “I’ve arrived. Let’s keep this simple. Make me feel comfortable.”

That’s what Schrager felt consumers wanted in that vanished prelapsarian era before the pandemic hit. What lies ahead for business and leisure travelers after COVID-19 is anybody’s guess. On one hand, it seems that during quarantine we’ve embraced our inner homebodies, working from home and eschewing travel because it’s either impossible or ill-advised. If and when that fine day arrives that travel is incontrovertibly safe again, who knows, we might just yawn and pad in our slippers and sweats back to our screen of choice, no more interested in hip hotels than hip replacements. Quarantine may have reprogrammed our notions of what true comfort really is, and it probably doesn’t require a concierge or a fresh vase of roses every day. Whatever travel we undertake at that point might come down to pure, barebones practicality. A Ramada Inn, or a more eco-friendly version thereof, might do just fine. Better yet — if it’s true that the coronavirus has really made us reevaluate priorities and rediscover the simple pleasures of nature — how about a campground and a tent? But maybe the opposite will happen. Maybe all this pent-up wanderlust, this rut of mind-numbing cooped-upness will burst the dams and send us en masse careening back into the ancien régime of huge carbon footprints and cravings for every creature comfort and all of the custom-curated coddling Schrager & Co. can dish up.

We are problematic creatures. We cultivate simplicity even as we salivate for luxury. We pooh-pooh excess, then head to Costco to buy the 24-pack of paper towels. Organic greens, free-range eggs, and everything farm-to-table makes us feel like responsible citizens of the world, but goddamnit, once in a blue moon there’s nothing like a Big Mac with fries, is there? Spending $750 a pop for fine dining, a day at an upscale spa, or a night at one of Ian Schrager’s hotels is an indulgence. But don’t we need — don’t we deserve, given everything else we endure and contribute — these very sorts of experiences, which reward our hard work and recharge our spiritual batteries? We are the sum or debit of our intentions minus our rationalizations. One person’s commitment to supporting good design is another’s worst nightmare of enabling conspicuous consumption. To whom do we answer when we think no one is looking? And what is the minimum thread count we require of our hotel pillows in order not to lose sleep at night?