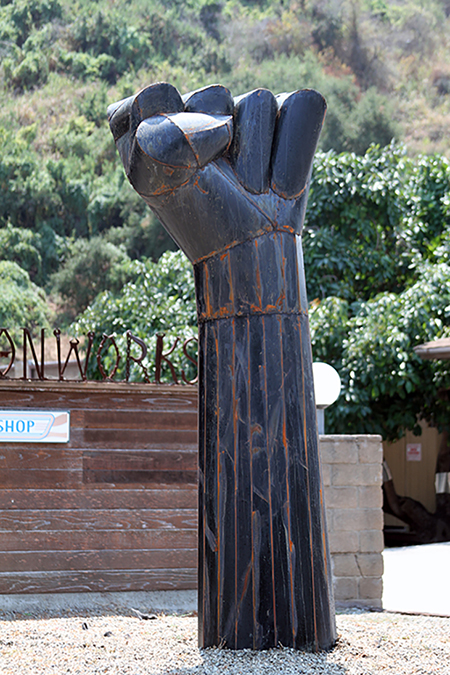 Jorg Dubin is an anomaly in the Laguna Beach art world; in the city known for its legacy of California Impressionism, for summer festivals and for galleries presenting tourist friendly art, the 60-something artist creates high-octane artworks that challenge and provoke.

Juried into Laguna’s Festival of Arts in 1979 for his ceramics, Dubin soon segued to paintings of drive-by shootings with guns pointed at the spectators. These artworks so alarmed the event’s staff and visitors that, “The Board of Directors kicked me out of the Festival in 1989.”

Since the Black Lives Matter movement exploded following the Memorial Day murder of George Floyd, several of Dubin’s works have addressed the drama and divisiveness in our country. One illustration of this movement is a large oil, “The Orange Stand,” centering on a white police officer threatening a Black Lives Matter protestor. Alongside are several cops in riot gear, a tank behind them and smoke filling the air.

Early this past summer, Dubin received a call from the city about upcoming public art installations through Laguna’s Arts Commission Fostering Creativity Grant Program. As their parameters included edgy and brave art, with the promise of awarding significant money to participants, he submitted “The Orange Stand.” The board quickly rejected this painting in favor of what he calls “cute and colorful art.” Soon after, the Commission asked for a second work, and he sent them “Unity,” featuring silhouettes of five kneeling protestors, with their colors proceeding from black to brown to white. This artwork conveys the unanimity of diverse citizens striving to create a peaceful world in the midst of chaos. This piece was also rejected.

His final submission to the Arts Commission was “Black Lives Matter,” a sculptural work made of sheet metal, depicting a raised arm and fist symbolic of the BLM movement. It is a timely testament to the horrors occurring in our nation, and to the healing powers of people uniting behind a common humanitarian cause. It also presented the opportunity for Laguna Beach to join the nationwide BLM movement supporting equality for all people — a movement including Washington, D.C.’s Black Lives Matter Plaza mural last June, the words “Black Lives Matter” painted in large yellow letters on the street across from Lafayette Square in front of the White House.

The Arts Commission rejected this third submission as well. Fuming at the narrow-minded stance of the Arts Commission, in August Dubin installed his BLM sculpture in front of his studio on Laguna Canyon Road, near the Laguna College of Art and Design. His landlord approved of the installation, and many people who drive by have posted positive remarks about it on social media.

Asked about the inspiration for the sculpture, Dubin said, “It has been more than 50 years since the start of civil rights movement and we’re still dealing with the issues. But the sculpture should start to disintegrate in about 10 years. And hopefully by then our country will have dealt with its systemic racism.” One can only hope!