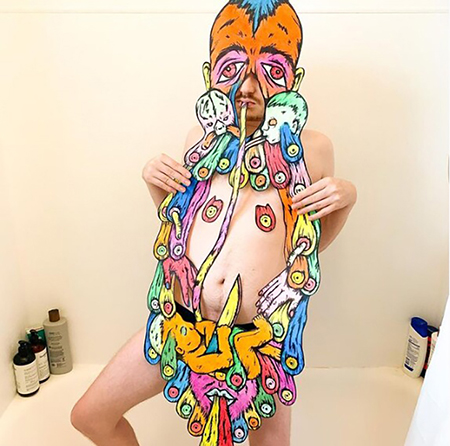 While the Covid-19 pandemic has caused many to feel depressed or exasperated from isolation and boredom, Dakota Noot, a young Los Angeles artist who earned his MFA from Claremont Graduate University in 2017, has found lockdown to be liberating.

Shortly before the health crisis changed all of our lives, Noot was preparing for an installation using cutout shaped drawings that were to be mounted on a wall and placed freestanding on the floor. When his show was cancelled, he decided to repurpose the cutouts, turning them into what he calls “wearable drawings.” With Instagram (https://www.instagram.com/dakotanoot/) as his main exhibition platform, Noot has been producing a series of intriguing performative photographs that continue his ongoing series of imaginative narratives on the subject of non-binary gender and sexual identity. Growing up queer in Bismarck, North Dakota must have been particularly challenging for Noot as a child and, in a recent interview (https://www.youtube.com/watch?v=2qLWPlOwptk), he remembers the overall environment as being very conservative and even violent. Fortunately for him, his father taught art, so Noot was able to find solace by making things in his dad’s classes.

Influenced by the comics of Clive Barker, Noot has been painting and drawing monstrous human/animal hybrids over the past few years in a style that he refers to as a “pop political cartoon aesthetic.” For Noot, the monster is a metaphor for how the “other” is viewed by hetero-normative culture. In his performative photographs, he inserts himself into carefully staged settings, both indoor and outdoor, where he assumes the persona of one of his hybrids, adorned with and surrounded by an array of coded symbols that suggest disturbing or offbeat narratives filled with implicit sex and violence. In this respect, he is exaggerating his notion of how homophobic individuals tend to perceive queerness, while also pointing to the history of the self-loathing gay stereotype. This is in full view in the recent remake of “The Boys in the Band.”

In Noot’s photograph “Don’t Have Kids,” he presents himself as a tribal monster wearing a body garment adorned with multiple drooping forms that he views as nippled testicles, fusions of female and male sexual anatomy. An umbilical cord emanating from his mouth attaches to an infant who appears over Noot’s lower body and wields a knife for protection, while two slightly older child-monsters suckle near the artist’s neck. Hunting and kitchen knives are recurring symbols in Noot’s oeuvre because they reflect his upbringing in rural farm country, where brutal slaughtering of animals for food or sport is commonplace.

In “Save Some for Mama,” Noot’s head is transformed into that of a sacrificial lamb, with his lower body covered with sensuous open mouths that symbolize lustful desires. In that he is encircled by a threatening assembly of knives, one of which is carried by a devilish visitor, we may be reminded of the tragic fate of Matthew Shepard, who in 1998 was tortured and beaten to death in Laramie, Wyoming, simply because he was gay.

Some of the most captivating of Noot’s photographs resemble Tarot cards. One example is “Gotta Catch Them All,” where a death figure is shown having just cut its own throat with an abstracted Pokemon Pikachu (pet monster) card. Poised beneath an arch formation made up of emblems signifying sexual desire, the victim’s heart, one lung and multiple nippled testicles are expunging from its body. In “I Am the Ocean, My Flesh Is the Stars,” stars inspired by the set of the 1902 Meliés animation “A Trip to the Moon” possess eyes that watch over the protagonist, providing reassurance that being queer is not a matter of choice, but of destiny.

Noot is not the first artist to address issues of sexuality and gender through performance-related animal personas. In 1969, Paul Cotton (who now identifies as Adam II, the Late Paul Cotton [born 1938, Fitchburg, MA]) performed at the People’s Park in San Francisco in his “People’s Prick” costume, a furry pink bunny suit with a cutout section that exposed his penis. In the 1990s, Nayland Blake introduced his rabbit-as-trickster costumes in performances addressing homophobia, racism, and misogyny. While Noot’s new work may be viewed within this art historical lineage, his imaginative imagery brings a fresh spin to the genre, while reminding us that there are still many hurdles to overcome in the battle to eradicate hatred towards non-normative people.