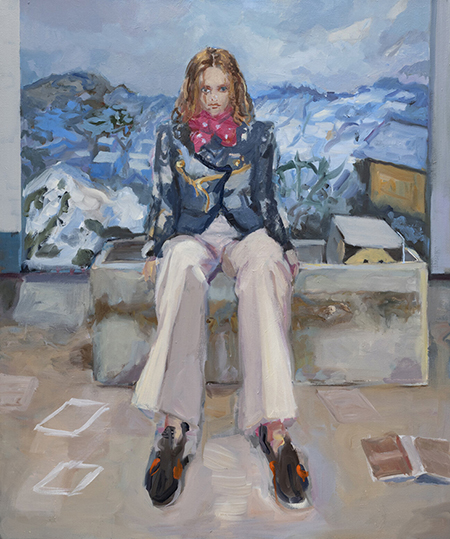 “Romantik” is a two artist show that is a colorful feast of figuration and portraiture in painting by and about women. Janet Werner (b. 1959) lives and works in Montreal, where Keer Tanchak (b. 1977) studied fine art before ultimately settling in Dallas. They recently came up with the idea for this exhibition: two artists, a generation apart, who pursue similar themes about the visualization of women. The similarities stop there, allowing for their works’ juxtaposition to establish a visual dialectic that compounds the challenge we experience when considering the two together, particularly in that each body of work taken alone travels its own inexplicable road.

As far as technique and the conventions of Western representation, Werner remains slightly more traditional. She works with oil on stretched canvas, producing images that maintain a view through the window. In a move that challenges that tradition, Tanchak paints on sheets of aluminum in alternating shapes without any attempt to hide its industrial trappings.

Both are interested in confounding the male gaze, theorized by Laura Mulvey in her famous essay, with an eye toward reclaiming the power that objectification denies women on their own terms. Both also take inspiration from commercial magazines. Werner often uses collage to create a completely new portrait by mixing parts from different images, while Tanchak holds onto her version of the figure, replacing the milieu to unsettle a scene already confounded by the odd and drastic shape of the aluminum.

As such, her use of aluminum references painting on metal or utensils, known as “tole painting” in American folk art or perhaps, more accurately, Mexican votive painting or retablos. In the latter, an image depicts a wish or desire. But here, they function as a gesture of thanks or a reference to strength and volition, as is evident in Tanchak’s mysterious “Heat Shield.” The aluminum takes the shape of a protective shield, with a profile portrait of a woman standing in the middle, her lower third truncated at the lower edge. Her red skin is matched by the bold strokes in the background; the left edge reveals the aluminum beneath. She holds a lively bouquet of flowers that draw her gaze. The colors of the bouquet interact with a dress teaming with irregular shapes. Tanchak’s paintings have been compared to the rococo style, but I see expressionism as well, given the jagged lines and an unknowable space. It’s as if the figure was transported into a red, inexplicable void.

“Aimant” is a horizontal rectangular composition that depicts a similar woman holding flowers standing to the left in a more conventional kitchen setting. It’s a kitchen with a painting mounted above the range, and a floor decoration full of wild color and energy. The title means “magnet” in French, a sad painting full of mystery and with other images floating on the left edge, perhaps so many refrigerator magnets, or a glimpse into an artist’s studio loft.

In Werner’s “Flame (Force Field),” a young woman with long ginger hair, in three-quarter profile and with a forlorn expression, stares out into the distance. Her tiny pale face, with emerald eyes, is completely locked in place at the center of the canvas. Her hair and expressive phrases of blue-gray paint boldly encase her. She sports a navy blue dress or vest, and in her hair white, yellow, and pink flowers look as if they’ve been pasted on. This is a Renoir beauty in a wild tableau whose expression short circuits what we think of as a picture of a pretty girl ought to look like, leaving an uncertainty that protects the subject in her “Force Field.”

In “Cadet 2” Werner renders a full figure composed symmetrically the full length of the canvas. She is foreshortened so that the closest things, legs and feet, are larger, while the rest becomes smaller as we reach the blonde girl’s head at the top of the painting. She wears a blue jacket that looks like part of a uniform with gold buttons and some yellow thread, with a violet scarf tied around her neck, and she sits on a long box. Around her are strewn a book and some scattered pages on the floor at her feet. Behind her is a large landscape painting with white and blue highlights. It’s a stunning image, both casual and confrontational. Her gaze meets us directly, foiling any attempt to appropriate her subjectivity.

In the art of Keer Tanchak and Janet Werner we come to see, through two very different approaches to iconography and style, a progressive sensibility that aggressively addresses the heavily contested battleground that is the visualization of women. Done as they are in paint — not with cinema, photography, or the digital imaging — they underscore the power to be tapped from this centuries-old medium for those ambitious enough to claim it as their own.