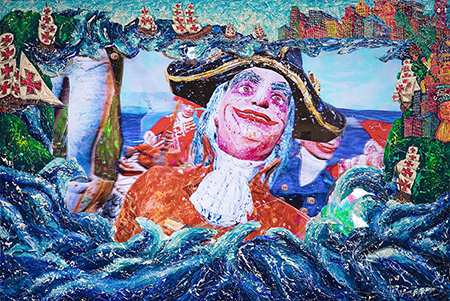 Nero fiddled while Rome burned. Trump golfed while Americans died of a pandemic. In “The Bacchanalian Ones,” the inaugural exhibition at Luis De Jesus’ new downtown Los Angeles space, Italian-born Federico Solmi inspires such musings, and then some, mixing traditional painting with the latest digital technologies. The result is a captivating political theater for confronting the grim reality that megalomania is both universal and enduring.

The real showstoppers — Solmi’s video paintings — are situated in the main gallery. Created using a unique synthesis of painting, drawing, 3D digital animation, gaming, screen recording and motion capture software, each video is developed through a process that may take up to three years to complete. Seeking to achieve what he views as a humanizing of artificial looking digital imagery, Solmi scans the textures of hand-drawn or painted figures, objects, and settings, and maps the scans over digital skeletons, the blueprint-like imagery that is created using animation software. Motion is incorporated by capturing movements that he and his assistants create in the studio. In this way he creates compositions that resemble expressionistic figurative paintings brought to life.

Reflecting the artist’s longtime admiration for 1920s-era silent film, the videos also suggest what cinema of that time might look like if shot in Technicolor or viewed on acid. Each is characterized by flickering lights and jerky movements, and features a musical soundtrack. With their thick cakey makeup and exaggerated facial expressions and hand gestures, the performers in Solmi’s morality plays recall the silent screen movie queen Theda Bara as Cleopatra, only as she might be depicted if fabricated from papier-mâché for a Mardi Gras float.

“The Bathhouse,” which is the largest work in the exhibition, conveys the feel of an ancient Roman bathhouse with five inset LED monitors serving as windows into a grand performance featuring the powerful elite from diverse historical moments. All are dressed to the nines in emblematic regalia as they indulge in drunken gluttony or frolic fully clothed in the pool at a Roman spa. At various moments they can be seen flailing their arms, applauding, and immersing themselves in gushing waterfalls. All the while they are accompanied by an orchestra that opens the drama and plays throughout its entirety. With everything shot from the vantage point of a person operating a video game, we view the performance from multiple perspectives, including up close and overhead. History buffs will particularly enjoy perusing the cast of characters, which includes Ramses II, Julius Caesar, Alexander the Great, Empress Theodora, Napoleon, Christopher Columbus, George Washington, Idi Amin, Pope Benedict XVI and other historical or recent power figures. To stress that the depicted debauchery continues to the present day, Solmi includes some contemporary references, such as such as sunglasses and a Jeff Koons “Balloon Dog.”

Some of the same characters appear in a video triptych that has a predominantly American theme, as made all the more evident by painted patriotic bunting on the frames. In the left section, “The Drunken Boat,” partying conquistadors and American Revolutionary War heroes applaud as women dance and entertain. In the final sequence it is revealed that their vessel is carrying a golden wooden horse, a gift they are bringing to America. The central video, “The Golden Gift,” opens with a grand parade reminiscent of the Ziegfeld Follies. Included in the mix are negative stereotypes of Native Americans, such as “Indian maidens” shown in a chorus line, and an “Indian chief” with full headdress who dances with a conquistador. In the center of the ballroom is the golden horse, which has been carrying American historical figures such as George Washington, Benjamin Franklin and Robert E. Lee, who enter the party by sliding down a plank.

In the final segment, “The Idolized Detractors,” we witness Donald Trump’s dream that never came true. With full pomp and circumstance, a motorcade and generals on horseback carrying American flags proceed towards the White House as crowds (among them Native Americans and Ivanka Trump) applaud and cheer. At the end, all is directed to Trump himself, perched high above his worshipers, dressed as a general bedecked with medals, and wearing red lipstick over a sinister grin that makes him look like Batman’s nemesis The Joker. In watching the triptych, both up close and from afar, it is difficult to take in all of the intricate details, but the overall chaotic tone is perfectly suited to the subject.

The most riveting of the videos is the more direct and focused single-channel work, “The Indulgent Fathers,” which appears to be loosely based on Emanuel Leutze’s iconic “Washington Crossing the Delaware.” Set within a frame that features images of ocean waves, ships that could be the Niña, the Pinta and the Santa Maria, and a Manhattan cityscape, the video moves in and out in a constant swirling motion that simulates what it feels like to be in one of the boats. The effect is similar to that of the Alfred Hitchcock movie “Lifeboat” only, rather than shown struggling to survive, the founding fathers, soldiers and women crammed into three boats are reveling in an orgiastic feast that includes a Thanksgiving turkey.

Rounding out the main gallery are three paintings of devilish colonial aristocrats seen behind clusters of microphones labeled “Foxy News.” In one of the two back galleries a handsome suite of ink and gouache drawings are based on digital skeletons and architecture. In the other, Solmi has mounted wearable masks of George Washington, Theodora and Christopher Columbus. VR headsets and controllers are provided so that we can enter the space of “The Bathhouse” virtually, thus immersing ourselves in the excesses of power.