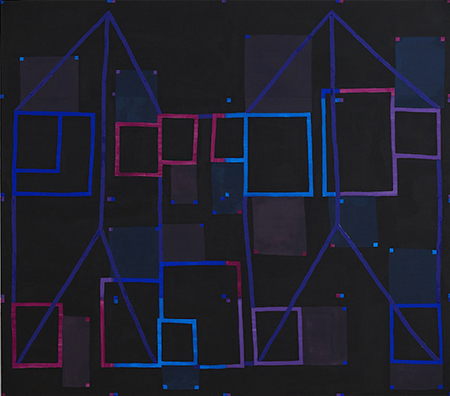 Jason Karolak uses oil on linen to create luminous compositions of neon-like color that jumps off from black backgrounds. He produces complex three-dimensional universes in which overlapping geometric shapes are highlighted with glowing dots and dashes of color. The dark grounds and squares, rectangles, parallelograms and other two-dimensional forms are overlaid with vivid pink, purple, green and blue linear patterns. Some paintings could be aerial views of a nocturnal landscape, while others resemble architectural elevations, circuit boards, labyrinths or mazes.

Karolak was raised in rural Michigan and attended high school at Cranbrook Academy before moving to Brooklyn in 1994 to study at Pratt Institute. He has spent more than half his life in New York City, and that influence is unmistakable. His interest in bright color, sound and music became heightened from living in Brooklyn’s Fort Greene neighborhood in the mid-1990s, where he listened to hip hop and frequented the neighborhood bodegas. He distills the city’s frenetic barrage of sights, sounds, graffiti, and compressed architecture into these thoughtful abstractions. Karolak has referred to life in Brooklyn as “a patchwork of various geometries grounded in observations of the physical world, which include architecture, space, light and the scale of the human body.”

Karolak admits to a “voracious appetite for color” and an interest in “imperfect geometry.” Variations on the grid is a familiar component of modernist art, but he brings to it a distinctive approach that results in a fresh vision. He has expressed a desire to maintain a certain “crudeness” in which the flow of the line is interrupted. According to the artist, these paintings evolve from drawing. He translates his explorations in pencil into larger ink on paper pieces and then into paintings. Karolak’s work feels, and is, organic rather than formulaic in its evolution. One is conscious of the physical activity of the artist moving the loaded brush across the surface while not overthinking where it is supposed to go. Working in this manner, he strips away specifics, leaving behind something more essential. The result is subtly reflective paintings that resonate between your eye and mind.