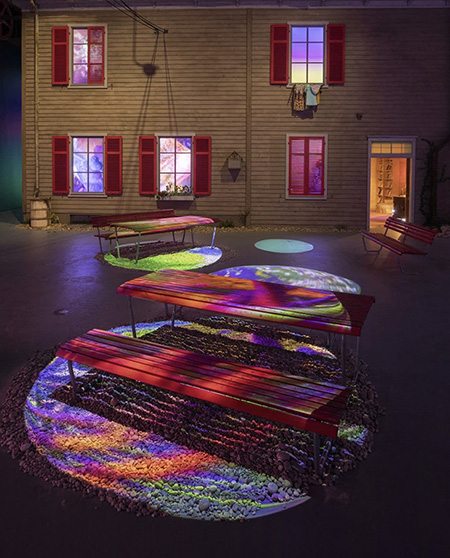 Pipilotti Rist, still from “Ever is Over All,” 1997, video installation

On first entering the museum, on the wall at the top of the stairs, just beyond the Information Desk, you’re greeted, or perhaps confronted, by the artist herself as she smears her face across the screen, distorting it in hideous though not menacing ways. She leaves a trail of frictional smudge across a glass pane, which is so close it may as well be the camera lens itself. If this video, “Open My Glade (Flatten),” from 2000, isn’t quite a fully summarized encapsulation of Pipilotti Rist’s oeuvre, it certainly underscores two key elements of her work. One, her frequent appearance as the protagonist of her videos; and two, her mission to overcome video’s inherent distancing tendencies by throwing as visceral an assault at the lens as possible. The viewer is bathed, submerged even, in the screen equivalent of a bodily embrace. But this phenomenon, one high point of Rist’s work, isn’t everywhere.

In “Ever Is Over All” (1997), unquestionably among her most iconic works, the viewer is more voyeur than participant: a young woman (presumably the artist) in a light-blue dress and red heels, swings a long metal staff with a painted flower at its tip. She sashays in semi-slow motion down an urban European street. She’s in good spirits, and when the soundtrack pauses, she gleefully bashes in a parked car window with the staff before continuing on her joyous stroll. Passersby look over benignly without engaging, though a policewoman gradually passes the woman on the sidewalk, smiling and tipping her cap as she does. I’ve loved this video since I first witnessed it, not too long after it came out, and how can you not? It’s feminism mixed with unadulterated joy and anarchy, delivered, ironically, with a light touch.

The immersive qualities of Rist’s work, meanwhile, reach their climax in “The Apartment,” which features everything from a colored LED fireplace (with great art catalogues and books on the mantle above) to a painting with green-screen projectability, to a wet bar including a bottle with its own projected video. And there’s quite a bit more in “The Apartment,” but it all serves as hors d'oeuvres to the main course of the corner projections, “Worry Will Vanish Relief (from the Worry Work Family),” “Mercy Garden (from the Mercy Work Family)” (both from 2014), and “Another Body (from the Lobe of the Lung Family)” (2008/15). Using ultra-high definition video equipment, Rist takes us into a sort of insect-eye perspective of the living landscape, where leaf blades glow and shimmer, hands-massaging-dirt dominate our field of vision, and we bob above and below the throbbing sea. There’s another ultra-visceral sequence of a nude redhead bounding and pouncing her way through the very green grass, alongside an equally voracious wild pig on the adjacent screen. The visual affronts are all mesmerizing; as a viewer, you pick your degree of intimacy, whether sitting on one of the couches some distance away from the abutting wall projections, or just underneath on one of the floor cushions.

All that said, “Big Heartedness, Be My Neighbor” is far from flawless. There’s too much overlap with the immersive art experience trend, as manifested in the collective Meow Wolf, selfie pop-up museums, and “Van Gogh, The Immersive Experience” (the latter currently selling tickets in 15 cities across the U.S. and Europe). Rist’s “Pixel Forest Transformer” is an installation of hanging, crystallized LED lights that visitors can wind through as the lights blink and gradually change colors while a meditative music score plays. While the “Forest” has a clear appeal, it ultimately yields too little aesthetic depth to compensate for its empty calories.

The central interior space of the show features “Peeping Freedom Shutters,” its multiple projections on the walls, floor and in the windows of a two-story house’s façade. It’s a bit more random funhouse than a coalesced merging of distinct works. Of course, criticizing an exhibition for having a popular allure and/or mass appeal runs the risk of amounting to knee-jerk snobiness. MOCA attracting a lot of visitors because Rist’s work is accessible to a wider audience in comparison to most of its exhibits, that’s fine (except for those who prefer an uncrowded exhibition-going experience). But in this case, the show’s detracting elements dilute the experience, and in turn lessen the impact of Rist’s strongest contributions to both the show and the video art canon, in which she has established herself as a leading figure.

Because “Big Heartedness, Be My Neighbor” is deemed a ‘Special Exhibition,’ tickets for adults are $18, despite the recent financial contribution that made MOCA exhibits free. The Communications department states that the “unique scale and complexity” of the show qualified it as a ‘Special Exhibition,’ but I can’t help but wonder if the more popular appeal is what really justifies the ticket price, and that perhaps MOCA, our beleaguered temple of contemporary art, really needs the revenue.