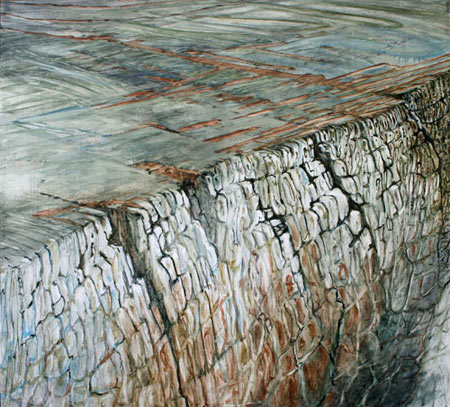 The natural world was not so long ago considered the criterion by which we judged art: during the nineteenth century, fidelity to observable Creation paid homage to God’s creation (with God hiding behind the clouds, listening in); during most of the twentieth, the creation of personal mythologies would serve as surrogates for lost faith. In recent years, contemporary art’s embrace of new technology, of the commercial art market, and of literary-philosophical theories concerned with cultural symbols led to the general disappearance of nature from galleries. Naturally, there were artist-dissenters, like Berkeley’s Judith Belzer. Her last series of polyptychs was entitled “The Inner Life of Trees;” in the current show of oils and watercolors entitled “Order of Magnitude,” she continues painting the natural world at a remove, finding micro and macro structures equivalent regardless of scale.

Gallery owner George Lawson describes Belzer’s goals and methods: “She moves freely from aerial to crystalline and cellular perspectives in her bid for intimacy with the natural order.” Through painting, that combined form of seeing, thinking, feeling and recording, she explores “the underpinning structures and porous surfaces of the world.”  By magnifying what looks like tree bark by several orders of magnitude, she creates craggy, fissured geological landscapes that combine scientific naturalism with expressionist abstraction. They also pack, in the current climate of oil spills and gas explosions, something of an ecological punch, especially here the quaky Bay Area.

Some of the paintings resemble panoramic aerial photographs as readily as they do plant structures, with a deliberate ambiguity. To my eye the works are more emotional than previous reviews have suggested. With their white backgrounds, colored-pencil palette, and zippy graphic energy, the oils resemble colored pencil drawings made by lapsed Impressionists suffering from a certain Expressionist anxiety — like Van Gogh or Munch. With their high vantage points, the landscapes become all-over fields of energy in the spirit of Abstract Expressionism. With their nervous evocation of fraught inner worlds, they suggest postwar European artists like Henri Michaux and Wolfgang Schulze. A few examples:

“Order of Magnitude #1,” the first of the series, is a large oil presenting an aerial view of flat farmland, the boundary lines receding toward an invisible vanishing point above and outside the painting. The unusual vertical format defies the comfortable spectator conventions of landscape by placing us high above ground, as in a flying dream, rushing headlong “downhill” to the sunlit top of the image, where the incline flattens out; Belzer has declared that she is “interested in nature, not as a remote romantic idea, but something that’s related to our everyday life.” But this landscape is anything but humdrum: it’s heightened and distorted by adrenaline, like Munch’s agoraphobic (and tourist-unfriendly) beach scenes.

“Order of Magnitude #2” is a smaller painting, and without the rush into perspective space of the earlier work. It possesses its own odd subtext however. Depicting a cliff or dam topped by what appear to be fog-laden planted fields, and mirrored by still waters below, it would seem idyllic but for the cold light and the crevasses hinting and erosion and crumbling — and the toothlike boulders separated by dark filaments, like nerves. There is also a hint of the archaeological about this work for anyone who has looked at engraved illustrations of pre-Columbian Mexico; a hint of Romantic ruins to anyone who has looked at THomas Cole or Anselm Kiefer.

“Order of Magnitude #11” depicts tree bark subdivided into a loose grid of plates that irresistibly suggests an aerial view of an urban landscape, of blocks and subdivisions and expressways. The fissures that have opened between the blocks of “buildings” suggest light wells in some human beehive of the future (like those painted by Irving Norman) that has somehow become petrified.

“Order of Magnitude #3” and “Order of Things  #4” (named after Foucault, not Lucretius) are smaller landscapes of the now-familiar fractured bark, here traversed by long, vermicular (or scarlike) rift valleys, possibly filled with water reflecting the white sky. Curiously, the topographies are filled with patches of abstract marks that suggest the glyphs that Chuck Close uses in his huge facial-landscape paintings, and the whitish scars might almost be primed gesso from which the paint has peeled, seen microscopically by a restorer. Art may be longer than life, but it’s also brief.