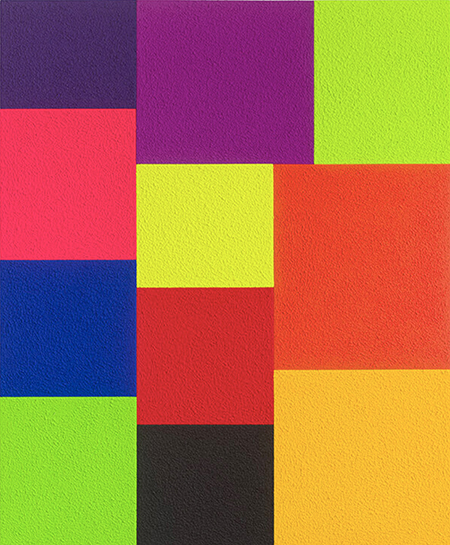 Specifically, Halley addressed in aesthetic terms the post-structuralism of Michel Foucault and his examination of historical discourses, from which he retrieved social and political notions related to the present day, that being the era of late capitalism, that described metaphorical conditions of confinement, restriction and surveillance. At the time Halley’s iconography included geometric cell forms from which a series of conduits in varying colors passed through the cells, sometimes connecting to others, or exiting the picture frame altogether. These cells read as prisons of confinement and, when applied to urban planning, served as an expanded critique of a totalizing system of domination.

In the new vein of work presented here, Halley has dispensed with the conduits and pathways that made the earlier work conform to figure/ground distinctions. He has decided to concentrate strictly on the cells themselves by painting single panels one color and then joining them together as single pieces composed of multiple parts, usually squares and rectangles in different sizes, that in turn come together to form large-scale versions of their component parts.

These grid-based abstractions are characterized by Halley’s usual materials, specifically Roll-a-Tex, a stand in for cheap stucco paint that formally adds texture. More importantly, the material is directly related to Halley’s critique of urban sprawl. Acrylic, either fluorescent or metallic, and in a range of colors, adds the final touch to these sometimes eye-popping paintings.

In this show the exhibition design is almost as important as the paintings themselves, serving as a key to interpret its entirety. In the large rectangular main gallery, eight paintings are arranged along its four walls. The rest are strategically mounted on five large cubes set inside the gallery space, at equidistant intervals around the room.

Upon entering, the color scheme in the first section is day-glo. Here we find bright and colorful paintings titled “Saw I”, “Saw II,” “Saw III,” “Saw IV,” and “Regression.” These are most likely references to colors deployed in his early work.

As we enter into a middle passage, Halley’s homage to the realm of monochromatic painting from the late fifties and sixties finds expression in blue, black, and red with “Bright,” “Correspondence III,” and “Correlation III.”

An exploration of an array of colors from color wheel theory comes into view as the maze-like passages continue. First, a preponderance of arrangements that include red, yellow, and blue reference the Neoplasticism of De Stijl practitioners Piet Mondrian and Theo van Doesburg, both of whom were early and consistent inspirations for Halley.

As the exhibition continues to the final paintings, a mixture of primary colors with varying shades of day-glo conflates all the colors that seem to be available to Halley in “Wrong Turn,” “Spell,” and “The Other Path.” In a way these titles refer to Halley’s intention for us to meander through the pathways, prescribed as they are by the walls of the gallery and the five large cubes arranged to create multiple and circuitous routes.

Taken together they reveal that the exhibition is really an installation intended to simulate one of Halley’s cell and conduit paintings in real space.  Paintings mounted on the cubes become decoration for the cells, while all of the surrounding spaces traversed by visitors act as circuits in Halley’s continued elaboration of a quite personal version of neo-conceptualism.  Here, the presence of human bodies is essential. They assure that conceptualism’s dictum remains intact: their interaction with the space completes the work of art itself.