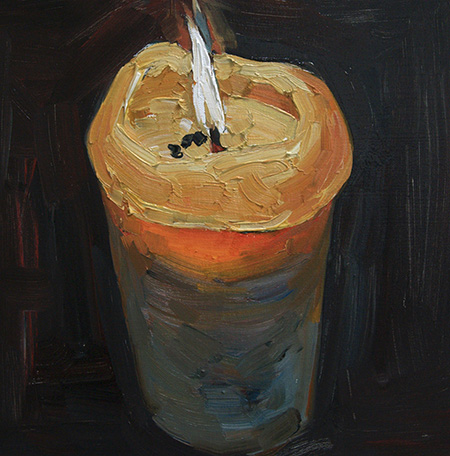 Hung Liu passed away from pancreatic cancer on August 7, 2021. Just prior to her death, the exhibition “Hung Liu: Golden Gate” opened at the de Young Museum in San Francisco, where it remains on view through August 7, 2022. The exhibition at the de Young includes a reproduction of her seminal work, “Resident Alien” (1988), enlarged to span an entire wall. The painting depicts Liu's own Green Card inscribed with the name "Cookie, Fortune.” A Chinese immigrant, Liu was formally trained in the social realist style of the Chinese Communist Party, yet through her graduate work at UC San Diego (begun in 1984; she came to the United States to study at the age of 36), she started to use her art to explore stories of immigration. Since the mid-1990s, she had been a professor at Mills College in Oakland, CA.

As Liu’s original gallery supporter in Los Angeles, it is fitting that Walter Maciel is hosting this exhibition to honor her memory and celebrate her career. A gracious wall text by Jeff Kelley, Liu's husband and studio manager, serves to introduce the exhibition and informs us that Liu's mother passed away from pancreatic cancer ten years before the artist succumbed to the same illness. Liu returned home to visit her ailing mother and produced a suite of fifty-one small paintings during the year after she passed. This body of work, titled “To Live” is on view as a homage to both mother and daughter.

Presented in groups on horizontal bands of color representing the rainbow, the paintings take us on a journey of remembrance. The “To Live” paintings are juxtaposed with other works that span Liu's career, ranging from video to paintings on hand-made ceramic tiles. There are also selections from her “Unthinkable Tenderness” series, inspired by Dorothea Lange photographs, like the large-scale enigmatic depiction of the migrant mother from ”In the Camp II” (2016).

Though bittersweet, the paintings that make up “To Live” call attention to everyday life, things taken for granted or overlooked, while bringing significance to that which is left behind. Liu began this series working from photographs she took of ordinary things left in her mother's Beijing apartment, such as a bulb of garlic, bowls and jars of food, a shower stool, a power strip and other personal objects. Liu painted these things in close-up — cropping the objects so they fill the picture frame — quickly and expressively with large sweeping brush strokes. She created one 12-by-12-inch painting each day. Together, they become a portrait of a person as defined by the things that surrounded her.

“To Live 33” depicts an empty bed and is followed by an image of a flatlined hospital monitor. It is here that the sequence shifts from a celebration of life to the reality of death. The next two images, “To Live 34 (II): Blackness, January 28, 2012” and “To Live 34 (III): Circle on Black, January 28, 2012,” illustrate the feelings of loss. Liu then moves on to the process of mourning in the remaining paintings of lit, flickering candles. It is impossible to view these works and not wonder how they relate to Liu's own collection of objects. The lighted candles now serve as a tribute to the spirit of the artist herself.

Three videos, a medium Liu was not very much known for, complement the “To Live” paintings as meditations on life and death. Projected in a darkened room is the short loop “Between Sky and Earth” (2013). In this mesmerizing piece, Liu cycles through a continuous grid of twenty images that morph from cloud-filled skies, to lit candles and roadkill featuring birds and deer, as well as the amazing shapes of the citrus fruit known as Buddha’s hand. Based on snapshots Liu took with her cellphone before her mother's passing, the work, especially now, carries a powerful meditative force. During the less than four-minute duration of “Black Rain” (2013) dark drips slowly cover a screen to obscure the orange glow of a cloud-filled sky. The 4:49 minute “Red Candle” (2013) also complements the candle paintings in “To Live.” For this video, Liu filmed a flame of a burning candle against a deep black void, while focusing on the disappearing wick and melting red wax. Again, given that the exhibition is a tribute, this symbol of the trajectory of life to death gains in emotional intensity and brings us into a more personal intimacy with the artist.