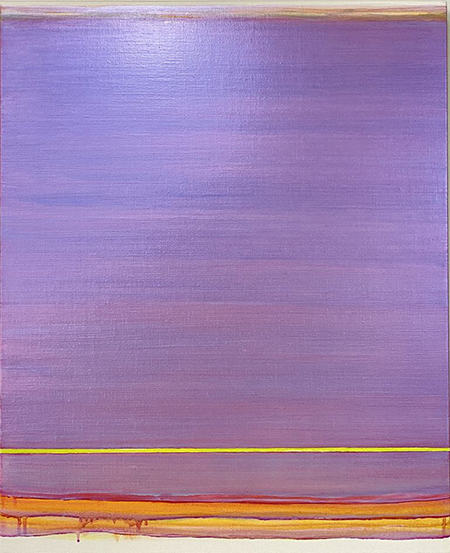 Immaculate geometry, nubby organicism, and illusionistic effects all meet in Shingo Francis’s “Transparent Reflection,” a suite of seven oil paintings that deftly reimagine key elements of the artist’s earlier series. The new works’ most striking aspect is their dynamic between shimmering interference pigments and traditional oils, lending reflective properties and pellucidity to myriad washes of color, hence the transparency and reflectivity referred to in the exhibition’s title. Beginning with roughly ten layers of thinned-out base color, Francis follows with two to three washes of interference, which give the appearance of shifting colors as one regards the works from different vantage points.

Beholding such movement across the spectrum gives one the feeling of gazing through rippling opalescent waters, as if across the surface of some enchanted lake whose surface undulations quiver in mesmerizing patterns. These migrations of hue correspond with the saturation of the base layers in reaction to those on top. Deep blue and magenta trade places in “Infinite Space,” blue-green and pink in “Yellow Light in Red,” seductive mint and an undernote of lavender in the deliciously botanical “Infinite Reflection in Violet.”

Each painting is vertical, a portrait format which makes these pure abstractions obliquely biomorphic. The series that preceded these was titled “Interference,” and more directly referenced portraiture. Bracketed top and bottom with rectangular framing devices enclosing open, reflective centers, they read as abstracted picture frames or wall mirrors reflecting viewers’ visages back at them, as if they were the living, moving subjects of their own kinetic portraits. In the current works, only the tops and bottoms of the compositions are boxed in, while the sides appear to expand, untrammeled, beyond the picture plane. In the bottom quadrants, rectilinearity dissolves into scalloped edges that peel away from color fields above, dissolving into marbled color and drips that impart an unabashed sensuality. It is reminiscent of the kind of lyrical abstraction to which the artist’s father, the late Abstract Expressionist Sam Francis, contributed.

These open-ended sides and drips like stalactites also recall the younger Francis’ “Infinite Space” series (2011-2019), effectively hybridizing it with the “Interference” works. This is a recurring strategy for him: mining the visual imagination across time in search of ways to reinterpret signature motifs vis-è-vis contemporary concerns.

The drips at the bottom of these paintings aren’t the only evidence of the artist’s hand. Though the layers of paint are myriad, they are so thin that the warp and woof of canvas and the surface topography of the brushstrokes remain highly visible. This is most definitely not the province of finish fetish. Moreover, while in reproduction the paintings can look airbrushed, seen in the gallery they read as agreeably old-school, with full wabi-sabi acceptance of imperfection that happens when a human being uses simple tools to make marks on pliant fabric. Their very reflectivity also speaks to a pre-industrial awareness of corporeality. They beckon us into kinesthetic engagement, a bobbing and weaving dance as from sundry angles the pearly colors change as one gazes into the looking glass.

“Green in Violet Cover” and “Blue Casting Orange” evoke the mistiness of fog billowing across tundra or a sandstorm overtaking desert wasteland. The line that delineates the lower portion of the canvas stands in for a horizon line, although Francis insists he intends no homage to landscape painters or, for that matter, to modernist antecedents like Barnett Newman’s “Zip.” If there is a sense of abstracted landscape and atmospherics here, it more likely a residue of Francis’ interest in Light and Space artists such as Larry Bell and Peter Alexander, or perhaps his early-1990s realist training in Florence, Italy, or his impactful visit with Joan Mitchell in Vétheuil, France.

Mitchell was a master transliterator of place, time, and memory. She took one look at the young painter’s work and declared it too literal. “Stop illustrating, goddamnit!” she bellowed. “You’ve got to paint from within!” He took that constructive dressing-down to heart and commenced an inquiry into the phenomenon of transformation, based on his readings of Gaston Bachelard’s “The Psychoanalysis of Fire,” fire being an agent for radical change of state. Since then he has simplified his compositions and palette, leading to the subtly nuanced geometries that we now encounter.

Rounding out the show are two gouaches on paper, both from 2020, a token sampling of a sprawling series Francis commenced during the Covid-19 lockdown. He made one piece per day for more than a year, working on 22 by 30-inch paper, as a way of keeping his creativity invigorated during that enervating slog. With their horizontal and vertical stripes, respectively, “The More to Give” and “To See the Light” are études evincing a fertile visual mind determined to remain supple despite the torpor and paralyzing anxiety of the pandemic years. In these works on paper, as in those on canvas, Francis delivers suavely elegant abstractions redolent of land and sky, hand and brush, and above all a spirited engagement with his own aesthetic evolution.