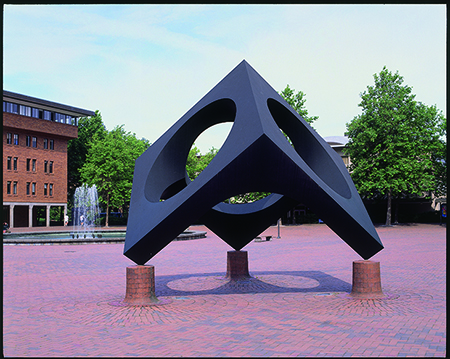 This exemplary survey of the Japanese American sculptor Isamu Noguchi (1904-1988) is not as comprehensive as his previous retrospectives (going back to his breakthrough show at New York’s Museum of Modern Art in 1946). What we get here is a tightly curated selection, chosen by Dakin Hart, chief curator at the Noguchi Museum and Sculpture Garden in Long Island City, New York, that gives us the widest view yet of this extraordinarily versatile and visionary artist.

Why, though, Western Washington University? Why Bellingham?

Noguchi’s “Skyviewing Sculpture” (1969) in the University’s Red Square was not only among his first public art projects, it jump-started the institution’s widely hailed Outdoor Sculpture Collection, the brainchild of the late art collector, patron, and former Bellingham resident Virginia Bloedel Wright. Ostensibly focusing on the theme of skyviewing in the artist’s work and in prior historic examples, such as the Jantar Mantars in northern India, curator Hart draws attention to how Noguchi anticipated contemporary art movements like Earth Art and Minimalism. The exhibition also shows how Noguchi expanded and deepened his vision of sculpture’s mission to connect to people and community. Thus the artist designed playgrounds, bridges, fountains, lighting fixtures, and furniture. The brilliance of Noguchi confounds clichéd arguments about art versus craft, or art-for-art’s-sake versus functionality. Whenever possible, he combined rather than segregated.

Seattle is the continental U.S. city geographically closest to Japan. The artist’s ties to the city were anticipated by his poet father’s stays in the early 20th century and his own friendships with ex-Seattleites like Martha Graham and John Cage. Two of his major, permanently installed sculptures, “Black Sun” (1969) and “Landscape of Time” (1975), complement “Skyviewing Sculpture.”

The concise catalogue essays allow for a number of broader conclusions about Noguchi’s stature and evolution. Before and after Bellingham and Seattle, he completed large outdoor sculpture “gardens” for Yale, IBM, Chase Manhattan in New York, and UNESCO in Paris. From the related maquettes on view we can see his ideas germinating and how small works grew large.

Noguchi executed sculpture in a variety of media, including granite, marble, steel, paper, and ceramics. For those already steeped in Noguchi’s work, there are selections on view with which you may not be familiar, such as a study for the “Challenger Memorial” (1985-87), its interlocking triangles reminiscent of the geodesic dome of his good friend R. Buckminster Fuller. The galvanized-steel forms of “Space Bird” (1982/2020) and “Sky Mirror” (1982-83) suggest how improvisatory and spontaneous shapes could emerge despite elaborate cutting and surface treatment. Plain yet compelling are “Re-Entry Cone” (1970), “Sky Mirror” (1970), and “Black Planet” (1973), all inspired by the 1969 Apollo landing on the moon, one of the most exciting and anticipated events in the artist’s life. His initial thoughts upon learning of the “giant step for mankind” were of a lunar surface playground. Whenever Noguchi was offered a space for a sculpture in front of a new building, he invariably wanted to design the entire space, so the lunar take-over idea was right in character.

Another revelation is the chain of pictorial themes dredged up by the artist from his childhood experiences with nature in Japan, California, and Indiana (where he attended boarding school after his parents’ separation). Besides the moon and sun, other recurrent images included birds, kites, and gardening elements. Addressed delicately and with great subtlety, Noguchi’s brand of reductive modernism served him well, even if Brâncuşi’s “Bird in Space” (1928) is always lurking in the background.

Interfacing with the public was a major motive for Noguchi who firmly believed in the non-religious character of nature and its inextricable connections to humanity. Ironically, several of his outdoor “gardens” (Yale, IBM, Chase Manhattan) are not open for public strolls. More immediate and accessible are his paper-and-metal “Akari” lighting fixtures, several of which are suspended from the gallery ceiling, and windvanes.

Noguchi’s outreach to the universe would be picked up and amplified by younger Earth Art innovators such as Robert Smithson, Nancy Holt, Michael Heizer, and James Turrell. All share with Noguchi an expansive yearning for the great unknown that can be clearly seen throughout this exhibition. Long before Turrell’s “Light Reign” (2003) installation at the Henry Art Gallery in Seattle, Noguchi’s perforated and punctured forms regulated the parameters of “Skyviewing Sculpture.”

Noguchi’s stature deservedly continues to grow, now reinforced by the art world’s globalization. His incorporation of architecture and sculpture located in India, Japan, Greece, and Italy erase national boundaries, in much the same way he himself did as a roving ambassador of volumetric uplift, aspiring to unite humanity.