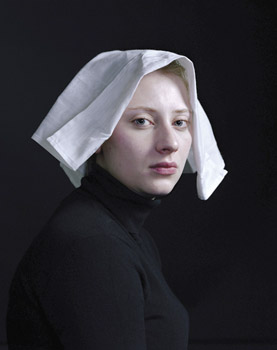 For Charlotte Jackson's inaugural exhibition in her new space in the Railyard Arts District, she chose to do something different than present the minimalist monochromatic works she is known for. In an inspired move, Jackson turned curatorial duty over to Ms. Bobbie Foshay, the former president and chair of SITE Santa Fe's Board of Directors, in a show entitled "Self and Family... A Recent Look." The gallery's website presents the history of portraiture as a chief inspiration for Foshay's composition of the theme for "Self," including Whistler, Picasso, and de Kooning as cases-in-point for pushing the portrait from a simple likeness into abstracted formalism. Each of the above artists' paintings of women are powerfully expressionist symbols that stand in for ideas about roles, characteristics, and gender. Foshay shows how the genre of portraiture has continued to flourish despite changes in mediums, theory, and trends. Foshay is a world-class art collector whose home features a breathtaking juxtaposition of works by emerging and well-known artists. Foshay managed to keep a similar electric mix crackling in this exhibition, with names including Alex Katz and Kiki Smith. Katz kicks off the exhibition with two portraits. As Foshay points out, Katz's "whole painterly enterprise has been a quest to reconcile the intangible realm of abstract art with the everyday stuff of living." Kiki Smith's work, a series of three shadowy woodcuts titled Mortal, impose upon the viewer "the artist's well-known grappling with hoary themes of life, death, and resurrection... focused expressly on ghostly images of her mother's head, feet and hands." The series was made as Smith's mother lay dying.

Fleshing out the refreshingly bright, newly renovated space is a terrific grouping of works by lesser-known artists who reference the construction of selfhood through the tropes of portraiture. Standout pieces were those by Hendrik Kerstens, whose MO of photographing his daughter wearing a napkin, perhaps, or a white plastic bag, as a Dutch girl's hat, reveal surprisingly effective, and beautiful, Vermeer-like results; Monika Bravo, whose mirrored surfaces force the viewer to contemplate herself, literally, while sonar beeps and computerized columns track time and lines of text refer to mortality and identity; and Ellen Harvey's two installations dealing directly and provocatively with the "self" in self-portraiture. Coke Wisdom O'Neal's work is hauntingly successful--especially when he keeps it simple: Two photographs of his parents and his child in monumentally large plywood boxes bring home the implication that we are not in this alone.