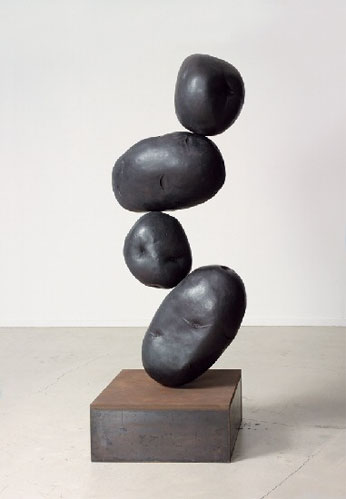 In “Charles Arnoldi: 1998-2001” a rigorously selected body of work bears witness to the artist’s commitment to redefining the generative possibilities of Post-Minimalist practice. Responding to the challenged viability of painting during the rapid ascendance of new media, the artist’s “Sticks” series back in the late 1960s interrogated the limits between painting and sculpture, communicated abstract gestures with found materials, and engendered a productive exploration of the relationship between line and volume. Consisting of jagged assemblages of painted twigs and branches, these now canonized works have contributed to the sustaining of the evolution of abstraction and enunciating a thorough reappraisal of painting’s key prerogatives.

Taking Arnoldi’s recent “Potato” series as its central focus, the current exhibition asserts the artist’s continuing dedication to colliding the untended with the consummately prepared. Here, the potato’s modest form proves the catalyst for rigorously ordered compositions that balance equal measures of stylization and playfulness. Prompted by a group of school children who assigned representational intent to his mid-90s abstractions, the series explores the tuber as a real-world analogue to and inspiration for the bulbous forms depicted in his acrylic on canvas paintings and cast bronze sculptures that teeter between the representational and the non-objective.

The show’s apotheosis is “Milestone,” a 67-inch column of four precariously stacked oblong forms. Its lustrous black patina both emphasizes gravity and suppresses its vegetal allusions. Imposing? Sure. But its quality lies in its levity. The work can’t help but supply the same slapstick humor resident in the assemblages of produce and kitchen instruments represented in the renowned “Equilibres” series of photographs by Fischli and Weiss. Originating from drawings based on the series’ sculptures, the show’s eight paintings take a more demonstrative stance – translating potatoes into dark, globular forms set against chromatically subdued, vaporous backgrounds. In all, the exhibition presents the “Potato” series as hot-blooded and the humorous, visually appetizing and conceptually nourishing.