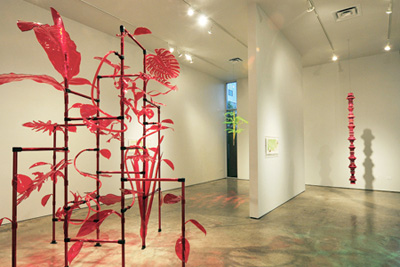 Thomas Glassford received international attention last year when his permanent light installation Xipe Totec wrapped a skin imbedded with red and blue LEDs around the Tlatelolco University Cultural Center in Mexico City. The previously stark modernist edifice, located near the scene of an infamous 1968 shooting of student demonstrators, is now wrapped in an exoskeleton of light. Glassford's exhibit "Pteridomania," on display last spring at Sicardi Gallery in Houston, continues his explorations in illumination and surface design. The gallery rooms were dominated by radiant sculptures made of acrylic and aluminum, which, though three-dimensional, cast intricate, changing patterns of shadow on the walls--a kind of drawing in subtracted light.

Drawing is evident, too, through his choice of acrylic sheets as material to render naturalist shapes of ferns and other foliage, which are alluded to in the exhibition name, a reference to the Victorian vogue of "fern fever." Pteridomania was a time of collecting frenzy, when botanists and amateur collectors searched the tropics to bring back exotic plants that could withstand the moderate climate of Britain. To make his fern leaves, flat acrylic sheets of brilliant reds and oranges have been cut, and then heat-formed in a kiln around forms to assume languorous shapes. The twisting leaves are like leaves of paper, sketch-like, recalling the Mexican folk practice papel picado, cut paper modeled after imported Chinese goods in the 19th century.

Born in Laredo, Texas in 1963, Glassford has long lived in Mexico City, where his work has, like Arte Povera, made use of cast-off materials and market goods. His recent fascination with commercial materials is not so much a retreat from the handmade as it is a foray into a high-tech rasquache, transforming industrial materials into high art. Layered, too, are his illusions to the exotic. Sometimes it is Asia or the tropics of Mesoamerica. But in Mexico City, England and the America of El Norte are foreign, too.

Along with the sculptural work were montages of found wall-paper and drawing, lining the gallery walls like portraits living in an indeterminate space, like that between photography and painting, the remembered and freshly rendered.