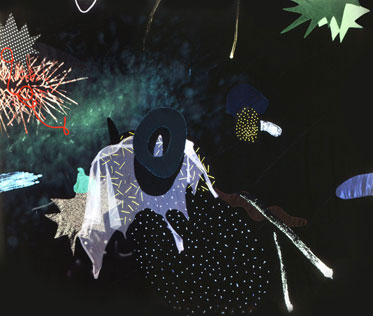 The “wow” factor that astonishes those initially introduced to Peter Alexander’s velvet paintings via print or online imagery intensifies considerably when viewers stand engulfed by works such as 1982’s “Dorado.” Akin to a geisha’s lush attire, the unexpectedly diverse and sensual overlays of color, patterns, lines and textures in “Dorado” create an environment that entices spectators to look into its depths, longing to draw close enough to inspect every layer. Get your nose right up to the delicate floating keyhole created by the circular elements at its center: the boundaries of the oversized work disappear, submerging you in a mysterious undersea world.

In the 60’s, overwhelmed by his response to witnessing underwater creatures gone florescent in a night sea illuminated by the red tide and flickering lights from a fishing boat, Alexander’s gut response was to find a way to express his awe through his art. Early attempts experimenting with paint black enough to simulate the ocean’s depths were disappointing. Only when he looked closely at materials from antique quilts, which his then wife Clytie happen to have on hand, did Alexander consider the cheeky possibility of utilizing black velvet as a major element in his work.

A gifted draftsman and colorist, Alexander assembled and left his mark on hordes of dazzling materials, utilizing paint, glitter, and the translucent and reflective qualities of various fabrics. He orchestrated them into his personal interpretation of natural phenomenon that quickly became branded as quintessentially Californian. He directed Clytie to loosely paste materials into place, allowing him to move various elements around until compositions clicked. At that point Clytie did the final sewing on works that L.A. Times critic Christopher Knight noted "take the lowest of low-art media - those cheesy paintings on black velvet for sale at every abandoned gas station from here to Tijuana - and transform it into an ecstatic world."

Along with the unstretched velvet works from the 80’s, several smaller, mid-70’s framed pieces, including “Beverly Hills” and “The Other One” are on display. Like ghosts of Julius Schulman’s iconic photograph, “Case Study house #22,” (shown recently at this gallery), numerous paintings by Alexander connote rows of lights receding into space. They bring to mind the dramatic night landscape underscoring Schulman’s image of Pierre Koenig’s cantilevered architecture. Schulman’s recollection of New York Times architectural critic Paul Goldberger’s comment about that photograph is applicable to much of Alexander’s work: “The night scene represented an idealistic image of young people’s dreams; what they visualized living in the hills of Hollywood California could be – without ever having been there.”

Alexander’s aptitude in dealing with space as well as light, honed in his early studies in architecture, emerges in the subtle resin sculptures included in this exhibition. Ardently engaged in the joys of the 60’s Californian lifestyle, early on Alexander realized that the plastics he had on hand to coat his surfboards could be utilized to make sculpture. Alexander first became noted for his polyester resin sculptures while still an MFA student at UCLA, showing West Coast work that was well received in New York. However, in less than a decade, the toxins emitted from plastics put an end to his use of that media. Now he hires out the fabrication, concentrating on designating color and form for engrossing works like “Ditman,” and “Mirasol.” Alexander enhances the rippled surface left from casting to obtain the suggestion of shadows moving through water. The effect is heightened when the viewer becomes engaged in these intimate works: moving around, changing position, accepting Alexander’s invitation to experience the sensation of viewing light captured in the space of an object.