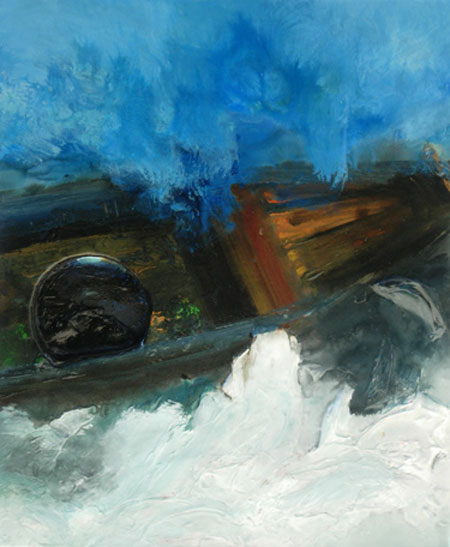 To fully appreciate Ann Phong’s multi-layered paintings, it helps to remember the diaspora of post Vietnam war emigrés who escaped their war-torn land before it fell under Communist rule.

A gifted painter with a penchant for subtle but nonetheless critical narrative, Phong offers more than a cursory look into Vietnamese/American history. To viewers who take the time to decode her multi-faceted work, she grants a glimpse into a soul that underwent a radical transformation beginning with her journey by boat that landed her in refugee camps in the Philippines and Malaysia and then eventually to the United States, where she fulfilled her goal to become an artist. In this she tells her own story as well as that of many of her compatriots.

Her current exhibition is comprised of work that reveals much of her transition from East to West, a journey fraught with physical dangers, hence her dramatic depictions of roiling waters, rendered in an imagination-defying variety of blues, and at times traversed by vague shapes representing the rickety, vaguely seaworthy craft in which she and legions of so-called “boat people” braved the seas’ natural and human-induced dangers (“Blue Layers” and “A Box of Water #3").

Juxtaposing heavily impastoed layers with finer, more transparent ones, as well as vaguely delineated images, she effectively conveys the complexity of her feelings. Suggestions of scattered faces and limbs offer homage to those who may not have survived the journey and loved ones left behind. “Advice,” was painted in 2008, nearly 35 years after the fact, and is the most dramatic of these works. It shows a small craft, nearly immersed in water and close to being smashed onto rocks while, vaguely discernible, a more foreboding than benign image of the Statue of Liberty looms in the distance.

At times her mood and palette change drastically, from the aforementioned noir-ish grays and blues to ochres, pale and deep reds and even delicate lavenders. Perhaps due to Phong grafting roots into local Vietnamese and artists' communities, and earning her MFA from Cal State University, Pomona where she is also now a lecturer, paintings like “A Conversation,” convey a sense of outreach and contentment. Then again, judging by the somewhat darker “Layers,” she leaves no doubt how accepting the present, while not forgetting the past, requires strength and forbearance.

Then again, “Germination” and even more powerfully “Dancing in Circle” and “Group Hugs,” with its portrait of a smiling child and more subtly rendered, joyful faces, suggest that acceptance of life’s challenges has morphed into an embrace of all it has to offer.