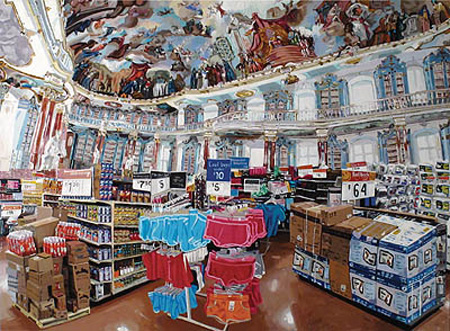 Jody Zellen opened her discerning ArtScene review of a 2003 exhibition of Jean Lowe’s work by observing that Lowe’s “installation works replicate European Parlor rooms while simultaneously inserting a contemporary point of view. Lowe often paints her imagery directly on the walls . . . Her installations have a purposely low-tech aesthetic and are readily accessible, but she makes a deeper political and social statement about consumerism and the impact of development on the natural landscape.”

Nine years later, decimation of the landscape accelerates while the chasm between rich and poor widens. The top 1% controls more and more revenue as the middle class share of the wealth steadily declines. The populace, schooled from childhood in the concept of brand loyalty, is obsessed with getting goods at a discount. In short, Lowe’s satirical fusion of disparate elements associated with all of the above has become more relevant than ever.

By electing to paint on oversized panels rather than the walls of the gallery, Lowe gains the advantage of portability. Not just a formal or practical decision, in its context it is a metaphorical acknowledgement of the lack of permanence dogging those who have recently been uprooted from their jobs, homes and/or communities. Reaching beyond the typical span of outstretched arms while measuring up to nine feet tall, her large-scale paintings fill the field of vision of viewers lured in for a closer look at gaudy Baroque and Rococo interiors coexisting with bargain priced commodities. The paintings back a compliment of handmade sculptures that reinforce illusions of depth while hyping the disparity between utopia and dystopia. Performing like stage sets, Lowe’s cock-eyed, loosely painted representations of opulent architectural interiors seem primed to collapse down on the maze of displays of gaudy, low end, bargain merchandise stacked below. Lowe’s marriage of luxury and low-end goods generates work that is simultaneously deadly sobering and obliquely humorous.

In a society hungry for excitement, nearly any item offered for sale can conceivably be labeled “sexy.” If it’s possible for hypocritical politicians to court the “women’s vote” while privately enjoying the attention of interns, it’s no surprise that gender polemics play into political and social issues in an endless variety of ways. Lowe spices her newest mix of classical eye candy and Discount Barn styled populism in a manner that incites deliberation about the selling of sex. Like the storyline in bodice ripper romance novels, the path from purchasing the short shorts on display full front and center in “Hey Sexy” commonly dead-ends at "Tear Stain Remover" or "Willendorf's Body Sculpt." Lowe’s versions of those personal care items as well as beer, dog food, cleaning products, etc. are on sale in that portion of the gallery transformed into a shop.

Unlike the sensuous, brightly painted, everyday items Claes Oldenburg produced and sold out of his studio (famously renamed “The Store”) Lowe’s sculptures are incorporated into a painted environment within the gallery that simultaneously compliments and distorts their reception. Oldenburg’s earliest choices of sculptural materials were similar to those Lowe prefers to use: papier-mâché, cardboard and/or wood coated with enamel. Distressingly, the sign painter’s enamel that allows Lowe to create the super saturated intensities that add punch to her trompe l'oeil paintings and sculptures has proven to be toxic. Dealing with toxicity is a problem Lowe shares with consumers of the cleaning, pet, and beauty supplies pictured in her installations. She is seeking a safer replacement that will not compromise the appearance of her work.

Other shifts in direction by the artist include an increasing emphasis on word play and a breakaway from the exclusive reliance on palatial edifices topped off by ceilings dripping with heavenly hosts like those in “Girl Boy,” “Tight Grip” and “Clearance (Baby Dolls).” The upper registers of “Wampum” and “Boomerang (Sizzle)” (which includes smoke and fire from a stylized battle scene) are both based on period designs of scenic landscape wallpapers. In Lowe’s most obvious distancing from pretentious palaces, “Save Even More,” only one aristocratic portrait and ornate chandelier remain amongst scores of flush mount ceiling lights reflected in glass walls suggesting a modernist hotel. “Real Life” plays with a beer add that’s split to sandwich merchandise stacked on display racks. The word “Unbelievable,” is positioned dead center on a price sign, begging to be read as mocking the idealist crystal clarity of the Coors Lite mountain sky.