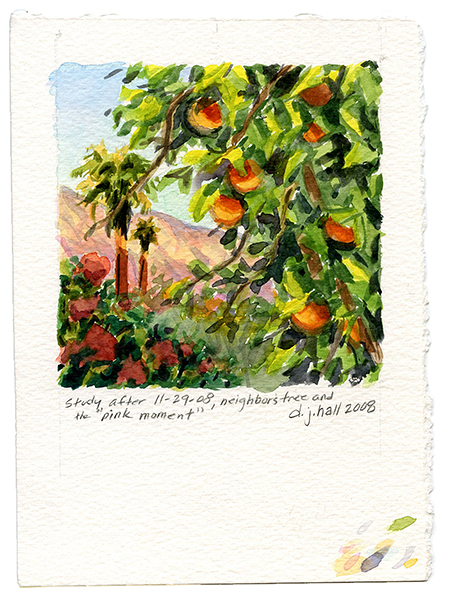 D.J. Hall’s signature works are brightly hued oils of glamorous women residing blissfully in sun-drenched Southern California. These paintings are in fact an outgrowth of her painful childhood, during which fleeting moments of happiness were spent at her grandmother’s pool and backyard in Orange County. Her mother’s early message — that a woman’s primary role is to maintain a beautiful and youthful image, whatever her age — also influences what we have grown accustomed to seeing from Hall.


While working assiduously on these large paintings, Hall has been engaging in personal sketchbook works that she collectively titles “Into Plein Air.” Displayed publicly for the first time here, these pieces relate to her signature style with their vibrant coloration, attention to detail and, of course, those Southern California settings. Yet the sketchbook pieces differ in media, style, process and intent. These three dozen “Untitled” works on paper are painted with watercolor and gouache, and executed quickly and impressionistically outdoors, on site. Subject matter includes foliage, trees, mountains and sky, as well as scenes of the Venice, CA canals, the Los Angeles River and Palm Springs landscapes and modernist homes. But in these there are no people.

Created over the last four years, these little gems are hands-on recordings of the artist’s momentary experiences. Each work includes a written notation of the location, date, and personal descriptions of the sites. The majority were painted in the Palm Dessert area; the artist has a second home there that she visits to replenish her spirit. Along with these small pieces, Hall displays two sketchbooks. She explains that, while working for years on her figurative works, she has been attracted to plein air painting, including Russian and contemporary Impressionism; she's recently begun to express this passion in what we see here.

Painting “Number 48” depicts a Palm Dessert fruit-laden orange tree with mountains and sky in the distance. The notation reads, “Study after 11/29/08, neighbors tree and the pink moment.” “Number 22” is an intimate portrait of a bridge over a Venice canal, including a close-up of lush bougainvillea trees. On this piece we read, “Carroll Canal @ west-end bridge looking east. Grafton came by this PM. And today I embarked on D.J.’s new directions - medium scale pic. of 8-year old me...” “Number 2,” depicting a slice of the pink façade of a Spanish style building with a flower covered trellis, brick wall and wrought iron gate, is a visual recollection of an afternoon with friends. She writes on the painting, “La Quinta Inn just on other side of garden fence where Corrine, Allen, Liam, Chas., Victoria & Toby are in the pool. Bungalows surround pool & beautiful plantings." “Number 44,” a small portion of the L.A. River, has an inmate notation: “LA river with M. Schrier principle of design class. Getting hazy now. Lots of bicyclists using this path and students painting over a ‘long’ distance.” “Number 7,” featuring a profusion of red flowers against dense greenery, reads like a personal diary: “Last bit of son @ Bean’s garden – dahlias growing! Bit Mt. San Jacinto hike yesterday – came back to Venice last night because heat/humidity too intense! Hot here in Venice, too. Finally, summer has arrived.”

The inclusion of three larger oil triptychs establishes a connection between Hall’s signature works and what otherwise may appear to be a departure in the sketches. While painted in the realistic, carefully rendered style of her characteristic larger paintings, their subject matter shares with the sketches a more introspective and less sociable feel. One triptych depicts first a lone swimmer, and then a modern-style home, and lastly flowers against the sky. Taken together with the sketchbook reminiscences and their written vignettes, the show reveals a mature artist’s willingness to share her personal side.