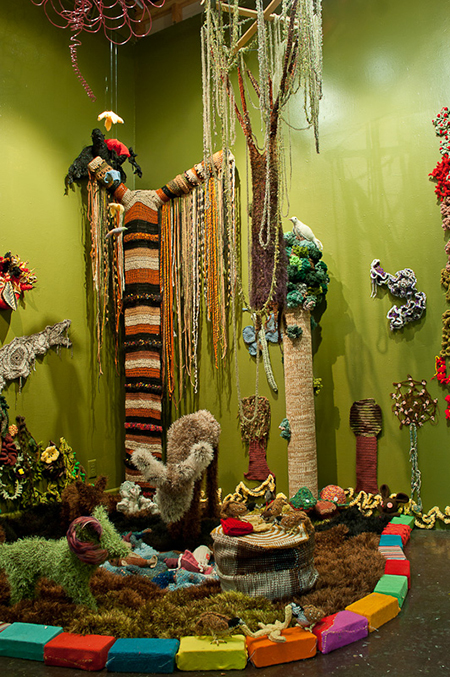 Crossing through a tunnel from Queens to New York City is a dulling experience. The excess of concrete, smog, dirt, grime, and unmentionable filth flying through the air makes you want to pretend it doesn’t exist. The institutional signage along this route directs traffic and simultaneously welcomes you to New York City much like the inhumane process of leading an inmate into a prison. Except for one particular day when the welcome sign to NYC was bordered with a knitted multicolored frame.

The brightly colored yarn that surrounded the sign was in direct contrast to the sea of gray and muddy slush that seemed to stick to the walls of the tunnel. An obvious intervention by a brave yarn bomber, it was a delightful entry into the wonderful world of guerrilla knitting.

In a similar vein, a local exhibition featuring YBLA — Yarn Bombing of Los Angeles — a group that has been crafting such installations and performances since 2010, is full of bracing and rebellious optimism. The installations typically placed outside are making an appearance inside, which allows for increased reflection on the sculptural quality and more strictly aesthetic potential of the art form.

Yarn bombing has become an admirable form of street art in the last few decades. The medium, usually associated with grandmothers knitting socks, has a much more edgy connotation since artists like Bill Davenport or Olek started covering public objects with multicolored crocheted patterns. It’s categorized as street art because it is not based in writing, like graffiti, and takes advantage of the diversity of art materials that also set it apart from the aerosol-based form. While yarn bombing may seem decorative, it’s about reclaiming and personalizing public space that has been lost to the shoebox style of architecture and cold industrial aesthetic that invades so many of our communities. Los Angeles is a perfect context for YBLA and this growing community is adding a welcome form of public art to our freeway-ridden landscape.

The art of concealing and revealing through yarn bombing objects is not unlike the way Christo and Jeanne-Claude covered buildings and monuments to unleash inquiry about the role and purpose of such objects. YBLA has engaged in a recent community project exemplifying this process. Entitled "Put a Ring on It," members of YBLA are asking participants to create a crocheted ring pattern and to wrap or place this material on something the individual cherishes or loves. Photographs of this project will be featured in the upcoming exhibit and proves to be an interesting experiment about the things we hold dear. The act of partially covering these objects with a symbol heightens the emotions toward the subject and what it ultimately represents. A collection of these photographs acts as a sociological experiment concerning values.

Anything may be the target of YBLA. The installations that are part of this exhibit are no different. The original identity of the sculptural objects often disappears through a maze of patterns and luscious textures. The most delightful aspect of the exhibition is seeing these objects function together as they become large-scale installations.

The white cube aesthetic is significantly softened through the work of YBLA. The playful attitude and symbolic representations of a particular installation of animals nestled around a pond complete with crocheted fish becomes a scavenger hunt to recognize the abundance of detail the medium offers. The diversity of its aesthetic seems to point toward the multiple hands involved in such work.

The importance of community is an integral part of yarn bombing. The works do not bear an individual’s name but instead focus on the collaborative process. This also transfers to classes and workshops that YBLA hosts to foster the communal aspects of the creation of such works. Working together, their collective voice comes together through a shared purpose and belonging to a group. An inherently softer side to street art, the participants are shattering any preconceptions you may have about these rebel artists.