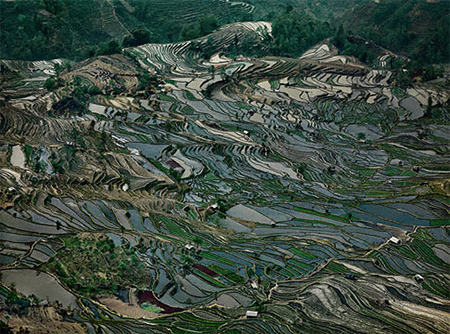 Historically in Western culture, Mother Earth has primarily been seen as fertile, recumbent, fruitful, proliferate and pliant. Although ideally considered the source of beauty and power, selections such as the following, from an early Greek Homeric hymn, imply that she has long been capable, when angered, of withholding her blessings and casting destructive forces upon those who hoard, waste or desecrate her bounty: “I will sing of well-founded Gaea, earth mother of us all. To you it belongs the means to give life to mortal men and to take it away.”

Born in Canada with ample opportunities to admire the beauty of his natural surroundings, photographer Edward Burtynsky realized that even the most stunning “calendar art” lacks the power to foster what he deems essential, moving society toward sustainability. Rethinking the means available to him to actively engage audiences in the challenges presented by landscapes transformed by industrial incursions, Burtynsky fosters a dichotomy between abundance and loss in a selection of vivid, detailed, large format aerial shots taken worldwide over locations reshaped by human interference. Titled "Nature Transformed”, the works on view grew principally out of his award winning, five-year film and book project, “Water," chronicling the dramatic effects of manufacturing and consumption on the earth’s most vital and rapidly depleting resource.

Burtynsky believes in keeping his subject matter open in terms of its meaning. Concurrently beautiful and monstrous, his work promotes a dialog that hovers suspended between seduction and fear. The photographer frequently works under extremely difficult conditions. In remote areas of China, Burtysky’s Hasselblad camera was rigged to a toy-sized helicopter that could stay airborne for a mere 10 minutes before running out of battery power. Looking through a video device, he was able to remotely snap the shutter on only a dozen or so shots a day that could potentially meet his standards for the all-over look and details he was after without losing clarity when printed large. "Rice Terraces #5, Western Yunnan Province, China" made the cut. Powerfully rich in surging detail, the 48-by-64 inch C-print is alive with an energetic flow that would feel perfectly at home in a painting by JMW Turner.

Two photographs depicting pivot irrigation in High Plains, Texas bring to mind the allure of the circular form in iconic works such as Jasper John’s "Target with Four Faces." They simultaneously join Burtynsky’s "Markarfljot River #3, Erosion Control, Iceland" and "Colorado River Delta #8, Salinas, Baja, Mexico" in attesting to the fact that landscapes reshaped by human interference can be found worldwide, enhancing Edward Burtynsky’s intention that these pictures will stimulate a process of thinking about something essential to our survival — something we tend to take for granted until it’s too late.